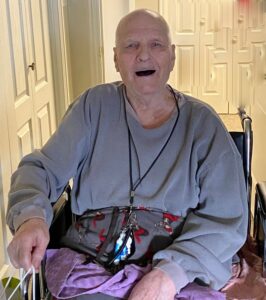 Rodger John Bowcut passed away of natural causes on July 4, 2021. Rodger was born March 1, 1941, to Earl Peter and Mary Rosella Olson Bowcut. He was greeted by a sister, Earlene, and was later joined by two sisters, Rosemary and Suzette, and a brother, Tex.

Rodger grew up on a small farm in Cub River. His youth was filled with hard farm labor but was also a lot of fun such as teasing his siblings and spending time with all the other Cub River ruffians.

Rodger will be remembered for being a hard worker. His kids recall him being up and hard at work before they arose for school. He would take a short nap then work the PM shift at Pepperidge Farm. He would get home after they were in bed and be up again early the next morning.

Rodger enjoyed playing and telling jokes and using awful puns. He didn’t often show his emotions, but he didn’t hold back when a sad song or movie came on. He enjoyed reading, especially Louis L’amour. He loved country music. He loved the outdoors and was often found camping, hunting, fishing, and taming wild horses.

Rodger also loved animals. He was constantly bringing home horses, cows, sheep, pigs, chickens, rabbits, and even fish. His favorite companion in his later years was his dog, Ed. Rodger suffered a stroke 10 years ago. He continued to live on the same small farm he grew up on until he had to receive more specialized care two years ago.

Rodger is survived by his wife Anna of Cub River and his children Cindy Bowcut of Brigham City, Utah; Becky (Jared) Reynolds of Kirkland, Washington; Jarred Bowcut of Cub River; Jeremy Bowcut of Burley; and Krystal (Mike Gray) Bowcut of Pocatello; his siblings, Earlene (Jon) Hiner of Boise; Rosemary (Rick) Beaumar of Boise; Suzette Powell of Preston; and Tex (Patty) Bowcut of Cub River. He also has 12 grandchildren and two great-granddaughters. Plus numerous nieces and nephews.

He was preceded in death by his parents; his sons, Shane and Travis; and his brother, Doug.

There will be a viewing from 9:30 to 10:30 am prior to the funeral services at the church.

The family would like to thank the many who took care of Rodger in his final years, but especially his three favorite nurses, Breanna, Sara, and Ashley (Dimples).