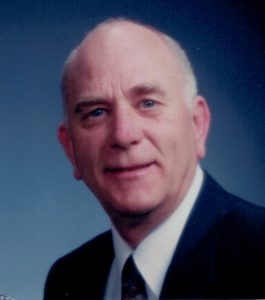 Reed Edward Smith, age 88, peacefully passed away on June 4th, 2022 attended by his family on both sides of the veil. He was born May 31, 1934 in Preston, Idaho to George Edward and Vera Fern Anderson Smith. He was a life-long resident of Preston.

In 1952, he graduated from Preston High School where he was involved in sports, operettas, and other activities. He was on the basketball team and was a star ‘southpaw’ pitcher on the baseball team. He continued to play baseball on the city league team and was known to all as “Lefty”.

On July 26, 1957 he married the love of his life, Peggy Joyce Hampton, in the Logan Utah Temple for time and eternity. In July of this year, they would have been married for 65 years. Reed and Peggy were blessed with 4 children: Reed Kim (Dana) Smith of Pocatello, ID, Lisa (Bryan) Andersen of Meridian, ID, Douglas Hampton Smith of Preston, ID, and Angela (Joseph) Imperiale of Colorado Springs, CO. There was nothing more important to Reed than his family.

Reed attended the Branch Agricultural College in Cedar City, Utah and also attended Utah State University in Logan. He enjoyed a long and successful career at Thiokol Chemical Corporation near Tremonton, Utah. For 37 years he traveled the 120-mile round trip working as a Radiographic Technician. He was recognized for his work ethic and was well-liked by all who knew him. Some comments from his employer at his retirement were as follows: “Mr. Smith is an outstanding employee”, he is “steady and dependable”, “carries his responsibility and more than his share of the work”, exceptionally cooperative” and “careful and conscientious in all performances of his duties”.

He loved the beauty of the great outdoors, camping, and cooking with Dutch ovens. He enjoyed fishing, attending sporting events, and riding his motorcycle and four-wheeler with his friends. He loved dogs and was an excellent dog trainer. Reed loved to read! He delighted in the scriptures and felt the power that books have to bless one’s life. He diligently pursued learning about the world around him and always had a thirst for knowledge.

Reed was an active member of the Church of Jesus Christ of Latter-day Saints his entire life. He loved the Gospel and served faithfully in every calling. He served in Bishoprics, as a High Councilor, High Priest Group Leader, Elders Quorum President, and he looked upon his responsibilities as a Minister and Home Teacher as a personal blessing. He served in the Spanish American Mission in New Mexico and Texas for 2 ½ years and later served two missions with his sweet companion Peggy in Cape Town South Africa and Salt Lake City Temple Square. In addition, he served for 19 years as an ordinance worker in the Logan Temple.

He is survived by his wife Peggy and his four children and their spouses. He has 17 grandchildren and 36 great grandchildren who all love and adore him. They will never forget his wise and silly sayings, his memorized poems, sense of humor, and family stories. Most importantly, he will be remembered by the way he lived, his loving example, and his calculated priorities of God, Family, Friends, and Service to his fellowman.

The family would like to thank Dr. David Beckstead, the Franklin County Medical Center staff, the kind nurses who attended to Reed, and the tender care of the hospice team.