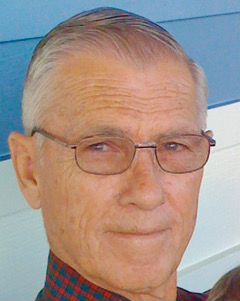 Raymond L. Van Vleet, 82, of Grace, Idaho passed away on Sunday, January 3, 2021 at University Medical Center in El Paso, Texas. He was surrounded via Zoom technology by his loving family.

Ray was born September 18, 1938 at Grace, Idaho, the son of Fredrick (Fred) and Lilas Rasmussen Van Vleet. He grew up and spent most of his life in the Grace area.

He married Ila Rae Stoor in March of 1960 at Soda Springs, Idaho. Their marriage was later solemnizedin the Logan, Utah LDS Temple.

He knew, loved and served the people of his community, county and surrounding areas his entire life.

He worked side by side with his dad at the Conoco Service Station in Grace. Later, he worked for many years as a sales rep. at Grace Equipment. He also owned the hardware store in Grace for a period of time.

He experienced a major career change when he decided to become a law enforcement officer. After some difficult training, he became a deputy for the county sheriff’s office where he served from 1987 to 1989. He then successfully ran for the office of Caribou County Sheriff and served in that capacity from 1989 to 2009. During that time he had the opportunity to serve as part of the law enforcement team for the Salt Lake Winter Olympics of 2002.

He served for many years on the county volunteer fire department. He also served for several years as a member of the Grace School Board. The Governor of Idaho appointed him to serve for a time on the Children’s Task Force.

After his retirement, he served a mission for the Church of Jesus Christ of Latter-day Saints along with his wife, Ila Rae, at the Heber Valley, Utah girls camp during the summers of 2013 and 2014. He also served in many other church callings during his lifetime.

He is survived by his wife, Ila Rae of Grace, Idaho as well as four daughters and one son. Vicki (Brent) Roholt of Vancouver, Washington; Tammy (Nelson) Coleman of Grace, Idaho; Julie (Scott) Maughan of Las Cruces, New Mexico; Jodie (Quin) Whitaker of Hyrum, Utah and Jon (Michelle) Van Vleet of St. George, Utah. He is also survived by 23 grandchildren and 21 great-grandchildren and a sister, Sandra Leonard, of Taylorsville, Utah.

The services will be streamed live and may be watched live on Saturday at 11:00am (MST) by clicking here.

Interment will be in the Lago, Idaho Cemetery.