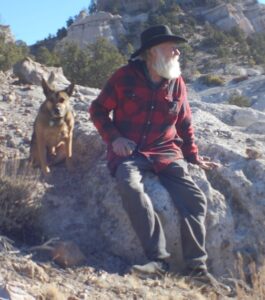 J. Truman, a mentor, ally, friend, hero, champion, and voice for the downwinder community, left this earth on February 4th after the demon cancer took him from us. He was a fighter, but he lost this final battle. He was fond of saying, A is for Atom, B is for Bomb, C is for Cancer, D is for Death.”

Born in Enterprise, Utah on December 30, 1951, he was a one-man movement, a true force who devoted his whole life and energy to his cause. He was a downwinder who fought like hell for justice, who was determined, indefatigable, and fierce in his lifelong work on behalf of those who suffered as a result of radiation exposure from 928 nuclear blasts in Nevada that spread fallout across this country, leaving illness, death and unbearable loss in their wake.

Jay is survived by his lifetime partner and husband, Monte Bright, whose devotion to him was unwavering in their 45 years together. He also is survived by their faithful dog, Tank, their cat, Sheebah, and their goats. He is preceded in death by his mother, Della Adair Preston, his father, Preston J. Truman Sr., and his sister Dawn Fallows, who died of the same cancer a few months earlier.

He began writing letters against nuclear testing when he was only 13 and traveled three times to Kazakhstan in the former USSR to meet with downwinders of the Soviet nuclear testing program. A brilliant man with a photographic memory, he was the go-to source for many people on downwinder issues, a walking repository of information. Aggressively curious, he had to figure things out and wanted to understand everything. He is the subject of Tim Skousen’s film, Downwinders: Did the Government Kill John Wayne.

Jay never gave up; even in the end he said, “I’m too ornery to die.” Yet, leave us he did. “Sharpen your pitchfork,” he always said when there was talk of resumed nuclear testing or other nuclear weapons-related outrages. Keep raising hell, dear friend. You were a one-man movement who left your mark on the world and made it a better place.

I want to thank Mary Dickson, Marian Kay Birmingham, Denise Nelson, Rebecca Bourne-Arrington J’s nurse in radio-oncology, and thanks to Sonam Puri, his oncologist at Huntsman Cancer Institute, she did everything she could.

At his request, no funeral services will be conducted.