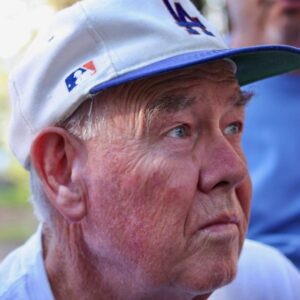 Paul Hancey Skabelund, 84, born in Logan, Utah, 13 August 1937, moved beyond the earthly veil on the evening of 28 December 2021. Paul was doing one of the things he was most dedicated to—checking the rain gauge—when he suffered a heart attack.

Paul’s legacy is his family. He married Joyce Roth in the Logan Temple on 13 September 1957. Together they have 9 children, 23 grandchildren, and 19 great-grandchildren.

Paul’s mantra, the “four-letter” word “work,” became the family’s mantra. For many years Paul’s vocation was as a hydrologist with the U.S. Forest Service, but he also worked alongside his family and others at home, in his community, and in his church.

He and Joyce produced bountiful gardens in Utah: Cedar City (1963-67), Springville (1975-2000), and Hyde Park (2000-19). McCall, Idaho (1967-75) was not friendly to vegetable gardening, but berry-picking, fishing, and hunting were. While teaching his children the value of honest labor, he helped each of them discover their individual talents, experience the joy of serving others, and develop a deep and abiding love and respect for the natural world.

With Joyce as a vital contributor, Paul created family bonds, ethics, and traditions that help build community throughout the world. Paul served as a coach (baseball and softball), explorer advisor, scoutmaster, bishop’s counselor, bishop, missionary (with Joyce in Nauvoo, 2003-4), and more.

Having earned his bachelor’s in forestry at Utah State (1959), Paul taught his children and others to value education (the move from McCall to Springville was driven by the desire to give his children proximity to universities), to practice frugality, to fish, to hunt, to explore and learn, to be a friend, to follow the Dodgers and Aggies (Utah State), and to live the gospel of Jesus Christ.

The Skabelund family expresses deep gratitude for the loving watch-care and ministry of all who have blessed our father and mother during the past few years in Hyde Park and Provo. Special thanks to Lainey Gardner, Terri Toomey, Paola Lara, Faith Livingston, and Diane McLean; we appreciate your service to our parents and family!

In lieu of flowers or other gifts, we encourage donations to an organization that blesses people’s lives.

If you are unable to attend, consider joining us at this link (Meeting ID: 922 7394 2137; Passcode: Skabelund). Following the service, Paul’s body will be interred at the Hyde Park Cemetery. After the burial, each of you is invited to share food and friendship at a catered meal at the funeral location. If you plan to join us, please help us prepare by notifying Becky Hunt via email by Tuesday, 11 January, with your name and how many will attend.

We ask those attending to consider the good health of all in attendance by wearing face masks. Thank you.