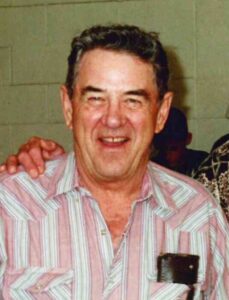 Newell Darrell Passey, born February 15, 1930 passed away peacefully Friday, October 1, 2021. He is the son of Mary Smith Passey and Newell B Passey of Lanark, ID.

He served in the navy in the end of the Korean War. After returning home he worked as a cowboy for Wallentine ranch. He met his wife Dorothy Marie Murphy and together they ran the Conoco gas station cafe in Georgetown. It was there they met their lifelong friend and businessman Wendell Welling. He hired Darrell and Dorothy to manage a newly constructed grain warehouse north of Soda Springs. After 13 years of managing the grain warehouse the couple divorced and Darrell went to work for JR Simplot.

Throughout his life His passion was horse racing. Along with his brothers Harold and Dennis they were Passey Brothers racing. In the winter months they were running chariot races and, in the summer, traveled around to the flat track races. They were strong competitors and had dreams of one day having a horse run in the Kentucky Derby.

He is preceded in death by his parents Mary and Newell Passey, his sisters Lida Bradley, Faye Wilcox, Ellen Clark, his brothers Harold Passey, Roy Passey, and Dennis Passey.

There will be a graveside service held on Saturday, October 9, 2021 at 11:00 am in the Paris Cemetery with a viewing prior to the services from 9:30 to 10:30 am in the Schwab-Matthews Mortuary.