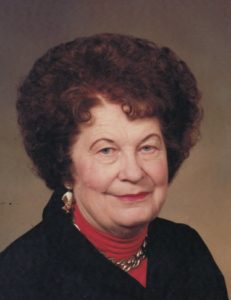 Nelda Corbridge Bingham, 95, passed away on Sunday, January 3, 2021 at the Heritage Senior Living in Preston, Idaho.

She was born April 21, 1925 in Preston, Idaho, the daughter of Lester William and Margaret (Gretta) Whitehead Corbridge.

She married Sterling A. Bingham on Aug. 28, 1942, in the Salt Lake Temple. They had two sons that passed away at birth and they were blessed with six daughters. They were married for 70 years.

She held many positions in the Church of Jesus Christ of Latter-day Saints. She served in all the organizations as a teacher and as a counselor in the Primary and Relief Society. She was a speech director and over many plays and roadshows. As a Jr. Sunday School coordinator, she was well-known as “Miss Friendly” and is still remembered that way by many. With her talent she gave many readings at ward and family parties. She was a hard worker caring for her family. A lot of sewing was done for her six daughters. She enjoyed painting pillowcases, towels and tablecloths.

She is survived by six daughters, Betty Lou (Clayne) Poulsen of Salt Lake City, Utah; Linda (Conard) Christensen of Syracuse, Utah; June (Kent) Aston of Weston, Idaho; Janet (Jim) Van Zant of Lehi, Utah; Joanne (Brent) Munson of Kearns, Utah; Sandra (Brian) Stuart of South Jordan, Utah; by 28 grandchildren, 80 great-grandchildren and by 6 great-great-grandchildren. She was preceded in death by her husband, Sterling; by two sons, Kenneth and Larry; by four great-grandchildren; by her parents; by one sister, June and by two brothers, Dale and Verlan.

The family would like to thank the Heritage Senior Living for their care, Dr. Beckstead, Xochithl Frankman, the Symbii Hospice and especially to Thelma Roley for all the work, love and support she gave to her and her family.

The services will be live streamed and may be watched Saturday at 2:00pm MST by clicking here.