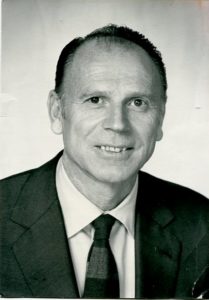 In the early hours of the morning of Friday, September 25, 2020, Milton Jay Berrey, loving father of three children, passed away at the home of his daughter in Shoreline, Washington, at the age of 98.

Milt was born on August 6, 1922 in Wardboro, Idaho, the seventh child of Julia La Reva Bissegger and Adam La Mar Berrey. He was nicknamed “Red” for his thick mass of deep auburn hair.

Milton married LouRaine Buffmire on June 25, 1950. They had three daughters: Ellen, Julia Denise, and Portia Jane. He was the grandfather of five children and great-grandfather of 15.

Milton,“Jay”, or “Red” was a great athlete, winning the Idaho State High School Championship in the 440 yard in record time. He also played on the high school basketball and football teams. He enjoyed performing in plays and musicals and won a regional contest in high school for his tuba solo.

Milton served as a US Navy SeaBee during World War II and was involved in campaigns in Bougainville and Guadalcanal. Three Berrey brothers served during the war, two in the Pacific and one in Europe, but only Milton returned home. Milton loved the United States, its freedoms and possibilities, and respected the ultimate sacrifices of so many. He lived by the words of “My Creed” by Dean Alfange, which he had memorized and had placed by the desk in his home. He was proud to be an American. As a sign of his love for his country, he raised the American flag every morning outside his home in Montpelier and respectfully retired it at dusk every night.

Milton received his Bachelor of Science degree in International Relations and Economics from the University of Utah. He furthered his education at The American Institute for Foreign Trade, now known as the Thunderbird School of Global Management in Arizona, where he received a Master’s Degree in Foreign Trade in their first graduating class. After graduation, Sterling Drug Int’l, based in New York City, offered him a job with their South American affiliate, Sydney Ross Co., where he was stationed in Mexico, Nicaragua, Colombia, Brazil, Argentina, Peru, and Venezuela. Additionally, his business assignments led him to Bolivia and Ecuador, and to remote and exotic outposts in all the countries where he resided. He was fluent in Spanish and Portuguese. He began his career as Winthrop Manager for the firm and his final assignment before moving to the New York Office was as Regional Vice-President for South America.

When he retired, Milt and LouRaine bought a Century-21 franchise in Stamford, Connecticut, where he was in charge of the commercial real estate arm of the firm.

Milton’s great love of music and rich baritone voice led him to form sought-after barbershop quartets in several countries where he lived. One of the quartets even performed at the Rio Sheraton Hotel in Brazil at Christmas time. Family members all received a free Christmas dinner which was a highlight for the kids.

Milton’s love of music continued for the rest of his life. He was the oldest member, at 94, of the choir that sang for the dedication of the Star Valley, Wyoming Latter-day Saint Temple in October 2016. He was a faithful member of the ward choir under the direction of Neil Harris. Every year he joined the Inter-faith choir that sang an Easter Cantata in the tabernacle in Montpelier, Idaho. To his last days he listened to and was inspired by the beautiful music of the Tabernacle Choir at Temple Square and Music and the Spoken Word, which was his all-time favorite program, with BYU sports coming in a close second.

Sports brought Milton much enjoyment throughout his life, whether running, golfing, calisthenics, walking Main Street every morning to order herbal tea and toast at Carla’s AHI shop, or swimming at Lava Hot Springs regularly at least once a week where he swam 10 laps into his 96th year. Milt loved BYU sports and for many years held season tickets to the BYU football games near the student section because he loved the energy there and liked to be near the band. He could be fiery about bad plays on the field or politics off of it.

Milton moved back to his childhood home after his beloved wife passed away. He loved the people of Montpelier, their sense of community, the beauty of the country, the blue skies, and the friendly slower pace of life. He enjoyed regular meals at Jalisco’s, The Ranch Hand, Cooper’s, and the famed Montpelier Senior Center, where on Fridays when musical groups played over lunch, he would stride in dancing.

Milt had a fun sense of humor, a fearless, adventurous spirit, and an insatiable curiosity for learning. He had an incredible memory and a wonder for life. He especially loved history., He explored the Amazon River, the Tequendama and Iguazu Falls, Incan ruins, and the history of each place where he lived. He was eager to learn new things and to participate actively in life, which was probably one of the secrets to his longevity.

In his last year, he loved driving to the ferry dock outside of Seattle and was amazed to see the hundreds of cars getting on and off the ferry, to see the ferry pull out and pull in to its dock. He was amazed at the colorful skies, the Olympic mountains, the radiant sunsets, glistening water, and the free movement of the seagulls off the shore.

Milton was a kind, generous, grateful, and gracious man with a tender heart, a loyal and faithful friend. He was a member of “the Greatest Generation,” and his perseverance through trial, his can-do, grateful attitude, his kindness, and joy at and interest in seeing and playing with his great-grandchildren left an indelible mark on his posterity. Many of the joys of his last year came from his interactions with his great-grandchildren, from their cards and visits, their laughter, and their antics. He was an active member of The Church of Jesus Christ of Latter-day Saints and deeply appreciated the love he felt from many members of his ward.

He was preceded in death by his wife, mother, siblings, cousins, a niece and a nephew. He is survived by his three daughters, 5 grandchildren: Erika, Kaeli, Steve, Jennifer, and Aaron, and his 15 great-grandchildren: Scotty, Summer, Adelaide, Elsie, Theo, Anzac, Mckenna, Oliver, Dixie, Sadie, Autumn, Louis, Cal, Owen and Duke, one niece and three nephews.

Funeral services will be held at the Montpelier 5th Ward Building at 2:00pm on Saturday, October 17, 2020. Please wear masks.

In lieu of flowers the family invites you to contribute to the Utah Honor Flight for veterans in his name: www.utahhonorflight.org. Milt traveled with them to Washington, DC, in June 2018.