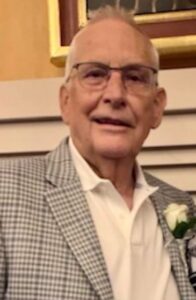 Max Fred Jacobson returned home to our Heavenly Father on April 14, 2022. He was born on July 14, 1941 in Bloomington, Idaho to Cyril and Gladys Jacobson who preceded him in death. He was also preceded in death by his beautiful wife Linda Lee Jones Jacobson, his brother Kay Jacobson, and his sister Beverly Grunig. He is survived by his daughter Jan Jacobson Olsen, (spouse of Paul Olsen), his two granddaughters Zoe and Carli, and his three sisters Norene Elson, Janice Jensen, and Shirley Billingsly.

Max was a retired schoolteacher who taught for 30 years in the Clark County School District. He started his teaching career at Cashman Jr High. He transitioned to Chaparral High School where he taught German and English until his retirement. He was affectionately known as Herr Jacobson by his students. He also performed contract work for the Clark County Public Administrators office for more than twenty years. In 1960 Max served a 2 1⁄2 year proselytizing mission in Austria and Germany for the Church of Jesus Christ of Latter-Day Saints. Max served his country from 1964-1970 as a member of the Army Reserve. Max was a devoted member of The Church of Jesus Christ of Latter-Day Saints. He held many church callings including serving as a Bishop, a member of the Stake Presidency, an ordinance worker at the Las Vegas Temple and he served a 15-month Service Mission helping to maintain church buildings in the area. Those who knew him experienced his strength, kindness, generosity and loving nature. He loved, supported and inspired many including his students, neighbors, long-time friends and the church members he served.

The interment will be conducted at the Bloomington, Idaho cemetery on Monday April 25, 2022 at 2:00pm