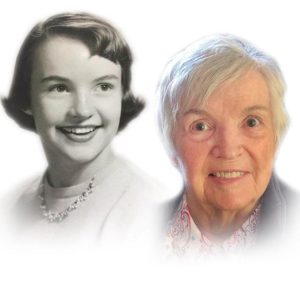 Artist, Author, Storyteller…Louise was witty, creative, charming and always cheerful. With a sparkle in her eye, she loved a good joke shared with friends. April Fool’s Day was her favorite holiday. One year she dressed up in a gorilla costume and visited the school classrooms of all her children, tossing candy as she went.

Born June 13, 1934 to Orson and Viola Garff, she turned 13 on Friday the 13th and considered it her good luck number ever after. The next year she was the fastest girl in the state at the 60 yard dash. She also won two art contests, which started her on a path to her future career.

Louise studied art at USU where she met Deon Hubbard, the student body president. They married in 1954 as Deon completed a masters degree, then went on to the greatest adventure of their lives, spending two years in Tehran, Iran working for USU and the US government in the Point Four Program, advising the Shah’s government on agricultural practices. She played tennis with the crown prince, bought Persian rugs and antique copper at the bazaar, and on one visit to a remote village had a few rocks thrown at her before the guide hustled her away. She was being stoned because her modest dress showed her calves and forearms.

After their assignment, they bought a Volkswagen bug and spent four months driving through the Middle East and Europe, finally coming home on the Queen Mary…with the car! Louise’s stories of climbing the pyramids, accidentally driving through a border checkpoint into communist Albania, and dealing with gas shortages to get from Spain to France are great family lore.

As Deon was finishing a PhD, the first of their four children was born. Holly (Peter Daines) was followed by Garff (Kamie Rawson), Marci (David Groesbeck) and Kelly (Nina Jorgensen). Louise and Deon had an unconventional marriage, but it worked. Louise and the kids lived in Logan most of the year but spent summers on the farm in Northern Idaho with Deon, and he spent winters in Logan with the family. It was the best of both worlds. Louise taught her children the things she valued: curiosity and learning, hard work and joyful play, a love of art, books and music and the significance of family and friends.

Later in life, after her children were in school, Louise finished a BS degree in Art, then a Master of Fine Arts degree in painting. A gifted teacher, she taught art lessons to many children at Edith Bowen School and through the Alliance for the Varied Arts, which she co-founded, Later she taught Art History 101 at Utah State for a year. She won many awards for juried statewide art exhibitions and from the Utah Watercolor Society.

One of her dreams was to write and illustrate a children’s book. She did that in 1997 with Grandfather’s Gold Watch, beautifully illustrated with pen and ink drawings. It was published by Deseret Book. The story is based on the life of her grandfather who emigrated from Denmark and crossed the plains to Salt Lake City in 1847.

In lieu of flowers, the family suggests a donation to CacheArts.

The memorial service will be live streamed and can be viewed via the following link (password: Hubbard):
https://us02web.zoom.us/j/81591922847?pwd=NUNGejVPYkRpZHpnUkNiZVJlZ1pMdz09