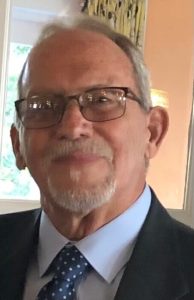 Louis V. Romero passed away suddenly on July 18, 2022. He was a loving husband, father, and grandfather.

Lou was born in Grand Junction, Co, on June 23, 1946, to Mike and Mary Romero. He was raised mostly in the Ogden area. He graduated from Ogden High School and attended Weber State College.

Lou married the love of his life, Vickie Sato, on February 15, 1976, in Elko, Nevada. Lou and Vickie both retired early and have enjoyed traveling to places such as Europe, Hawaii, Alaska, Mexico, Canada, and most of the United States. He loved meeting new people and making new acquaintances. He was an avid cook and was known for his homemade tortillas, tamales, enchiladas, ribs, and souvlakia. His food was enjoyed by many family and friends. Everyone loved his Navajo tacos. But he would never let you cook in his kitchen and if he taught you something he would test you the next time he saw you. He loved being with his children and grandchildren, being known as Papa or Grandpa. His passion was cars and his Indian motorcycle.

Lou also was a prankster who loved humor and made everyone around him laugh. We always had a lot of fun. He would talk to anyone he ran into and make conversation.

Lou is survived by his wife: Vickie; daughter: Kim (Mark); and sons: Shane (Ashley) and Jason (Jami). Grandchildren: Kylee, Jason, Kaden, Madden, Christian, and Kai. Great-grandchildren: Rileigh and Caden. Son and daughter: Chris and Becky. Also, a sister Kathy and brother Mike. He was preceded in death by both his parents and brother Ross.