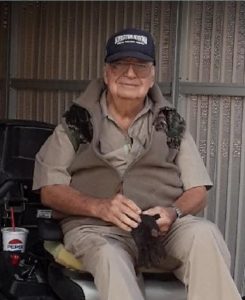 Lloyd C. John died June 21, 2022, at the Bear River Valley Hospital in Tremonton, Utah just a few miles from where he was born at the Valley Hospital 86 years before. Son of James Clifford John and Verna Lundberg John, Lloyd’s arrival November 2, 1935 was a surprise. His mother was a twin, but she had no idea she’d be welcoming her own set of twins that day. Floyd came first, and it soon became apparent that Lloyd was on his way.

Raised in a farming family on the Iowa String, Lloyd worked and played hard. He learned discipline while hoeing and harvesting sugar beets and other crops alongside his parents, cousins, aunts, uncles and siblings. He attended the Evans Branch of the LDS Church. He was a student at McKinley School and Bear River High School until the family moved to a farm in Pavillion, Wyoming in 1952. There he attended the rural Morton School. But it was a dark-haired, brown-eyed town girl, Kathleen Simon at Riverton High School, who caught his eye and won his heart. They married April 16, 1953 in Billings, Montana.

A month later Lloyd and Kate joined her father and four siblings for a vacation trip to Mexico. What started out as a honeymoon trip took a turn when Kate and two of her brothers contracted polio in Acapulco. Kate ended up in an iron lung in Mexico City and was later flown to Salt Lake City and Ogden for care. This event tested the young couple’s commitment and resolve and cemented their union. It wasn’t easy as Kate recuperated and adjusted to permanent paralysis in her right arm, but they persevered. Together they raised three children. Lloyd worked in the gas and oil fields of Utah and Wyoming to support them. Eventually he started his own water well drilling company in Casper, Wyoming with Kate as secretary and bookkeeper. In the early 1970s, they incorporated and created John’s Drilling, Inc. and the family moved to Arvada, Colorado.

Work, church, and family were the focus during Lloyd’s years in Colorado. He was an active member of the LDS church. He was a dedicated and generous home teacher and someone his church leaders could depend on. When the Denver Temple was dedicated in 1986 Lloyd became a temple worker and served for many years. Sadly, the family lost Kate to breast cancer in January 1990. Lloyd was lost and devastated, but his faith and family supported him.

Thankfully, Sharon entered his life. Her vibrant personality and generous spirit brought companionship, laughter, love and adventure back into his world. Together they traveled, worked at the Temple, and harvested their large garden in Arvada. They bought a place in Mesa, Arizona and became snowbirds. While there, they worked in the Mesa Temple. They enjoyed spending time with grandchildren and other family. In 2006 Sharon and Lloyd sold the Colorado property and returned to their Box Elder County roots and never looked back. Four summers they worked as service missionaries at Cinnamon Creek Campgrounds.

Lloyd was dependable, a good neighbor, and a devoted worker. He loved a good western. He loved banjo music and was an accomplished whistler. You knew he was in a good mood when he whistled while he worked.

Lloyd is survived by his wife, Sharon, and three stepsons Bart (Terry), Micheal (Sheron), and Milo Bardwell, their children and grandchildren. He is survived by his three children from his marriage to Kate–Mike, Marianne (Tricia), and Sandra Loveridge (Bob), his grandsons, Chris (Megan) and Nick Loveridge, and great granddaughter, Kinsleigh.

Interment will take place at the Golden Cemetery in Golden, Colorado on Tuesday, June 28.

There the family will hold a brief graveside service.

Special thanks to family, neighbors, and friends for reaching out during this challenging time, as well as love and support during Lloyd’s later years. Also thank you to the hospital staff and hospice at Bear River Valley Hospital, especially Dr. Gardner.