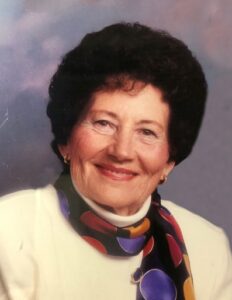 LaRae Evelyn Christensen Nelson said her goodbyes to her family and peacefully departed back to her Heavenly Home on December 7, 2021.

LaRae was born October 19, 1921, the middle child of 9 children born to Joseph and Karen A. (Carrie) Christensen in Bear River City, Utah. Her Father passed away when LaRae was approximately 11-12 years old, leaving her mother to raise 7 surviving children during very difficult times.

After the war, Chuck Nelson, fulfilled his promise and returned to Tremonton to court and marry the Love of his Life . . . LaRae, as he knew she was too young to date prior to his 5 years of military service during WWII. They were married on February 5, 1947, which was also the most wonderful day for LeAnna, LaRae’s Daughter, to have been so blessed with such a wonderful Dad. They were later sealed in the Logan Temple on May 8, 1963.

After their marriage, the two of them, along with LeAnna, made their home in Tremonton where Chuck and LaRae remained for their entire married life. On April 5, 1953, they were so blessed to welcome Michelle, the second daughter, into their lives.

Shortly after moving to Tremonton, Chuck and LaRae purchased a bakery which was a lot of hard work. A few years later, they sold the bakery and Chuck went back to selling cars.

For the next several years, LaRae was a stay-at-home Mom. She always kept a very clean home and made wonderful bread, scones and cinnamon rolls. In the summer and fall she kept busy bottling a variety of fruits and vegetables. Also, every Christmas she made the most delicious candy and chocolates of all kinds. She was a wonderful seamstress and made clothes for her daughters without even using a pattern.

LaRae was an active member of the LDS Church where she held various positions, one of which was President of the Primary.

After both daughters were grown, she decided the time had come to get a job and became a dental assistant – first, for Dr. Roy Woodhead and then, for Dr. Carl Dickerson for many years prior to retiring.

Approximately four years after Chuck passed away, the family convinced her that she needed to be closer to family and decided she wanted to be close to her two beloved Granddaughters, Kala and Suzette and moved to Eagle, Idaho. That was her second-best decision of her life – the first being – marrying Chuck. Kala and Suzette have been wonderful to her and it also enabled her to be around her four Great Grandchildren – Amanda, Natalie, Emily and Nicholas, and five Great-Great Grandchildren – Hudson, Charlie, Evie, Ruthie, and Esmee.

She was preceded in death by her parents, husband and eight brothers and sisters.

Burial will be at the Bear River City Cemetery.