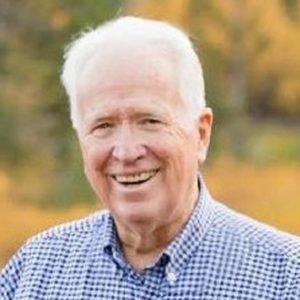 Keith Ellis Jorgensen, 88, passed away Friday July 23, 2022, in Orem, Utah from causes related to age. He was born December 8, 1933, in Logan Utah as youngest of seven children of Royal and Bernice Ellis Jorgensen. Keith’s early life was spent in Cache Valley on the family farm in Amalga originally homesteaded by his great-grandfather in 1869.

Keith served an LDS mission from 1954 to 1956 in the Northwest States Mission. One of the families he frequently visited as a missionary was the Barlow family, who happened to be friends with the Jorgensens, in Spokane Washington. The Barlows had an adorable, impressive teenage daughter named Joyce. Following his mission, Keith tempted fate by letting Joyce’s youth (and what he feared would be perceived as impropriety due to his being in their home as a  missionary) dissuade him from exploring relationship possibilities. Fortunately, his wise father pointed out that he would never find a better wife anywhere else in the world, so he returned to Washington to explore the possibilities. He and Joyce were married in the Logan Temple less than one month after her graduation from high school on June 25, 1957, after which they settled in Cache Valley. Except for a brief time in Logan and 18 months in San Francisco as missionaries, Keith and Joyce lived and raised their five children in Amalga. They remained there until her passing in 2013.

On January 3, 2015, Keith once again hit the wife jackpot and married Sharon Johnson in the Logan temple, then moved to River Heights. Sharon filled a hole in his heart that he thought could never be filled again. Their devotion to each other these past seven and a half years has been a beautiful example to their families.

Keith was known for his love for and service to others in all areas of his life. Be it family, church, or community, he was always there to answer the call. He served in many callings in the Amalga ward, his favorite being scoutmaster. He also served as bishop of a singles ward at Utah State University. In 1963, he started the Organ Center, which later became known as Keith Jorgensen’s Magnavox Home Entertainment Center in the early 70’s. To save time and signage costs, the company became known as just Keith Jorgensen’s about 10 years later. The first store was in Logan and grew to 12 others throughout Utah, Idaho, and Nevada. In 1976, Keith was elected to the first of 3 two-year terms in the Utah State Legislature.

Besides his family, Keith’s greatest joy was serving in the Logan Temple. He was very surprised to be called as an ordinance worker at the relatively young age of 47, but very soon came to love the sacred work there. He continued his work there for the next 37 years, including over 30 years as a sealer.

Keith is survived by his wife Sharon, of River Heights, his five children: Michele (Brad) Dennis, of Mapleton, Michael (Jill) of Lindon, David (Yvonne) of Idaho Falls, Mark (Jerri) of St. George, and Timothy (Kiri) of Wisdom, Montana, plus his stepdaughter Vicki (Todd) Hansen of Hyde Park, whom he lovingly referred to as his “bonus daughter.” He is also survived by 29 grandchildren, 49 great-grandchildren, and his sister Noreen Cronquist of Logan.

He was preceded in death by his brothers Dell, Clarence, and Ray, his sisters Beth and Ruth, one grandson, Morgan Gubler, and one great-grandson, Bryce Wilson.

A visitation for family and friends will be held Tuesday evening July 26 from 6pm – 8pm at Allen-Hall Mortuary, 34 E Center St in Logan and prior to funeral service from 9:30 AM to 10:30 AM at the Stake Center.

Interment will be at the Logan City Cemetery.

Condolences may be sent to the family at www.allenmortuaries.net.

The family extends heartfelt gratitude to family, friends, neighbors, and medical professionals for their care and compassion during this time. Until we meet again, Dad, we love you and will miss you!