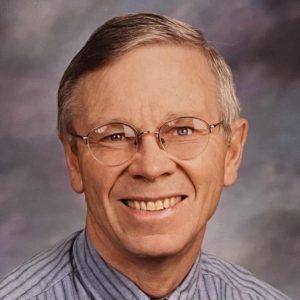 John Lee Brady passed away on July 22, 2022 at the age of 80 years old surrounded by loving members of his family. He had fought a valiant fight with cancer since 2017.

John was born July 29, 1941 to parents John H. and Eulalia Lee Brady. He graduated from North Cache High School and Utah State University. He earned a Masters Degree in Math Education in 1967, and began teaching at North Cache Jr. High. John also taught at Sky View High School. After 33 years of teaching for Cache County School District, John retired. That same year, John started teaching part time in the Math Department at USU and taught an additional 17 years, making a total of 50 years of teaching. John said going to school and teaching did not seem like he was going to work because he enjoyed what he did so much. He loved teaching so many great students over the years.

John met the love of his life on a blind date. He was immediately smitten on the first date with a lovely young lady by the name of Marilyn Farrell. When John took Marilyn to the doorstep after their first date he asked her if she would be available for more dates the following Thursday, Friday, and Saturday. After a year of dating, John and Marilyn were married September 16, 1966 in the Logan Temple. This September would have been their 56th wedding anniversary.

John was an active member of the Church of Jesus Christ of Latter Day Saints. He served a full time mission in the North Western States Mission, which included Idaho, Oregon, and Washington. John held several different positions in the church such as High Councilman, Bishop of a USU married student ward, and Temple Officiator for 16 years in the Logan Temple. For four years, John and Marilyn served in Salt Lake as Hosting Missionaries in the Conference Center acting as tour guides to incoming visitors.

John loved the great outdoors and especially enjoyed campouts with his family. Horses were one of his greatest loves and one of his favorite things to do was to go on rides with family and friends. He was an avid skier and served on the Ski Patrol at Beaver Mountain for several years.

John enjoyed selling used cars as a part time job and did his best to get a good deal for his customers. He was also a Jazz enthusiast and loved watching their games with Marilyn sitting next to him, holding hands, and cheering for the team.

John’s mother passed away when he was only eight years old and he had two younger brothers, Bob and Mark. Their father eventually remarried and the boys then had a second mom, Lavena. The three Brady boys have remained good friends over the years and enjoyed many wonderful times together. John and Marilyn have been blessed with four children and eleven grandchildren. His family was the focus of his life and brought him the greatest joy.

John was preceded in death by his father, John H. and his mother, Eulalia Brady, and a granddaughter, Kayla McCall Wright.

A viewing will be held that morning at the Hyde Park Chapel from 10:30 – 11:30 AM prior to the funeral services.

A special thanks to the Logan Cancer Center and Dr. S and Todd Hamblin PA, Dr. Daniel Sharp, LDS Hospital and staff, and Symbii Hospice for their special care.

Condolences may be shared at www.allenmortuaries.net.