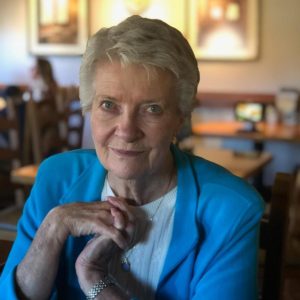 Joanne Robinson Fraser passed peacefully on Friday, July 29, 2022, in American Fork, Utah. Joanne was born October 18, 1934, in Preston Idaho to Arnold Lynn Robinson and Margaret Ann Hall Robinson. She grew up and attended school in Preston where she met Glen “Bud” Fraser from the nearby town of Grace who was cruising Main Street to check out the Preston Girls. They were married the next year on July 28, 1953. Bud and Joanne lived in many places during their marriage including Rhode Island, Idaho, Alaska, and Utah.

Joanne was primarily a stay-at-home mother raising six boys who all adored her. She loved her family above all else and considered her sons to be perfect in every way. She was a member of the Church of Jesus Christ of Latter-Day Saints and served faithfully in many positions including Relief Society President on four separate occasions.

Joanne was preceded in death by her husband and parents.

Interment will be in the Smithfield Utah Cemetery.