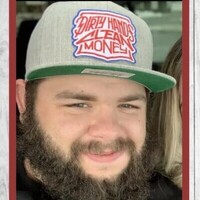 Jarret John Alderson, known as JJ, passed away unexpectedly on May 15th, 2022, at his home in Malad City Idaho.  On Saturday June 25th, loved ones, family and friends gathered in Pennsylvania to participate in a memorial service in his honor.  A Celebration of Life is scheduled for July 17th from 2-4pm in Malad City, Idaho at 92 S 100 W Malad Idaho (Vol. Fire Station).

JJ was born on July 17th, 1993, in Washington, Pennsylvania to Tina Shekerko (Skip) and Mike Loar (Mindi). JJ was loving and fun as a young child. He is the eldest of three children and being the much older brother has always been protective of his younger sisters, Chevelle and Kyleigh. JJ was very close to his grandfather, Westley John Alderson, whom he referred to as his “Pap”, and looked up to him. JJ loved his Pittsburgh sports teams, especially the Steelers.  He enjoyed playing football with his friends, as well as riding bikes, hacky sack, and video games, (generally his PlayStation II or  Xbox).

Hurricane Katrina’s destruction of property and homes created a ripple effect that made housing a challenge for his family. Dealing with all of this was stressful, however his mom shared that he often used his sense of humor, cracking jokes, and being funny to help deal with tough situations. His mom states that JJ, was “Always the person we leaned on for support”.

JJ experienced hardships in his life and developed a better understanding about how those experiences contributed to the man he was becoming.  Although JJ was able to overcome many challenges in his life, there were times he turned to excessive drinking, which led to trouble with the law and eventual alcoholism. Throughout his battle to fight alcoholism he had long periods of sobriety where many experienced the best versions of JJ. He was able to make significant changes that had a positive impact on his life and all that knew him.  Sadly, there were times he hid his drinking and then it would catch up with him in time, landing him in another sticky situation.  JJ knew getting help and continuing to reach out for help was the only way for him to get past this, but the struggle to reach out in hard moments was sometimes defeating. One thing about JJ is that eventually he would face his actions and consequences, taking full accountability for his choices.  JJ would want his loved ones to know, in his heart, he wanted sobriety; that even with help it’s hard, and that he would never want anyone to stop trying to overcome their addiction because there is help and support.  JJ summed things up once by saying, “Time is everything” and that “Life happens, Shit happens, and that changes things” and as a result, we “Just have to adjust.”  Given his limited time with us on earth, his appreciation for time is a perfect reminder to be in the moment and to see the good in what we have.

JJ experienced a lot of adjustment in his youth as he moved around a lot and attended multiple schools.  JJ attended both Cherry High School and Carmichael High School. JJ went to live with his aunt Juanita and his uncle James around 2010. JJ joined the Job Corps program in Kentucky to learn a trade while finishing his GED. He learned about carpentry and was a graduate of the United Brotherhood of Carpentry Pre-Apprentice Program with J&D Carpentry. One of the lesson’s JJ learned during the carpentry program is the value of doing a job correctly the first time and not to cut corners.

While in the Job Corp, JJ met and started dating Jaki Saunders. They fell in love and their first son, Jhase, was born in 2013 to the young and excited new parents.  JJ and Jaki stayed with family in Washington Pennsylvania and worked in a few places, one of which was the kitchen of the Meadows Racetrack & Casino.  They moved to Malad City, Idaho when Jhase was 7 months old, and lived with his in-law’s until he and Jaki moved into a place of their own. In 2014 they welcomed baby number two, Jarron, to their growing little family.

JJ was a very hard worker, and was most recently employed by Vicars Trucking Inc, in Plymouth Utah as a welder. Prior to this, JJ worked as a pipefitter at Associated Brigham Contractors in Plymouth Utah. JJ also worked for Great Basin Industrial (GBI) as a welding assistant.   He was excited to learn to weld and enjoyed creating and repairing things. JJ’s natural competitive side pushed him to work hard, learn new skills and seek mastery over them.  JJ took personal pride in his work. He wanted to do a good job representing his employers, which also included Creative Mines, Hess Pumice and a few other local businesses.

Music played a role in JJ’s everyday life. He loved listening to music, finding life relatable songs, and sharing them with friends. He had endless favorites but in recent months shared that he liked the song Classic as it puts him in a good mood that made him feel like dancing.

JJ developed many friendships over the years, many of which became family. Whether joining JJ’s Celebration of Life in person or in your hearts, know that you are part of his chosen family.

Jarret John Alderson is survived by his two sons, Jhase and Jarron (Jaki) of Deland, FL.  His parents Tina Shekerko and Mike Loar, and JJ’s two sisters, Chevelle and Kyleigh of West Virginia as well as many aunts, uncles, & cousins.

He was preceded in death by his grandfathers and great-grandmother.