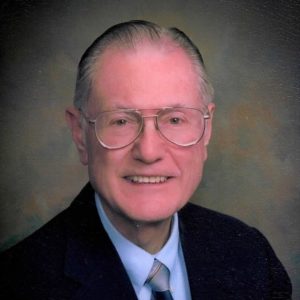 Our beloved husband, father, grandfather and great-grandfather James C. Hoffman, 89, passed away peacefully in his sleep on January 3, 2021 in Provo, Utah.

Jim was born on February 27, 1931 to Edward Hoffman and Lillian Andersen Hoffman in Logan, Utah. He was the last of five children. He was born in the midst of the Great Depression, and his family had a farm in Lewiston, Utah, where they raised sugar beets and many kinds of farm animals. Life was not easy for them. He came from a family of hard workers who were frugal and kept things until they were worn out. When Jim was 8 years old, they moved to their home at 179 East 500 North in Logan, Utah, which was built by Jim’s father, Edward, and which still stands today.

Jim’s mother, Lillian, taught him the value of a good education and told him he could accomplish anything he put his mind to. She helped him have confidence in himself. Later in life, Jim told his family he had a very happy childhood and he credited this fact with helping him through his many challenges in life.

During his high school and university years, Jim successfully competed in speech and debate, journalism, drama, ROTC drill team, and scholastics. In high school, he won the Utah state high school speech tournament for Extemporaneous Speaking, and his debate team won second place in the state-wide tournament. He was also a member of many fraternities and social clubs. He loved people and he loved learning, working hard, and setting high goals.

Jim earned many scholarships, awards and honors in high school and college. He was the Valedictorian at Logan High School in 1949. In college, Jim was also the Valedictorian of the 1955 college graduating class at Utah State Agricultural College (now known as Utah State University) in Logan. Throughout four years of college, he achieved straight A’s in all of his classes except for two, in which he received B’s. He majored in business administration, with minors in economics and accounting. In 1953, he was selected as the honor student to represent the Utah Manufacturing Association at the Congress of American Industry in New York City, where he delivered another one of his notable speeches. As Utah State’s No. 1 student scholastically, he delivered the Valedictorian address at graduation exercises on June 4, 1955.

Jim interrupted his college work by serving a mission for The Church of Jesus Christ of Latter-day Saints in the Eastern States Mission, with headquarters in New York City, from 1951 to 1953. He served in New Jersey and became the Supervising Elder in the New York District. He also portrayed the wicked King Noah at the Hill Cumorah Pageant for two years, for which his friends and family have teased him many times over the years.

Jim’s greatest accomplishment was meeting, courting, and marrying his sweetheart, Jenay Austin. She was a freshman and Jim was a junior when they met in September 1953, in the basement of Old Main on the Utah State campus while standing in line outside the bookstore. It was love at first sight. She later said there was a glowing “aura” about him. He later said that, at that moment, he knew he was going to marry her, although he did not tell her that at the time.

They started dating and Jim filled out an application for Jenay as Delta Phi Dream Girl. Although Jenay did not win, Jim and Jenay were “pinned” in a special Delta Phi ceremony reported in the local newspaper. Being “pinned” meant “going steady” and was the stage prior to formal engagement.

Jim and Jenay attended the April 1954 General Conference together and then went to “This is the Place” monument, where Jim proposed to Jenay. They were married in the Logan LDS Temple on May 27, 1954.

Shortly after Jim graduated from college in 1955, their first son, James, Jr., was born on June 15, 1955. Only 5 days later, Jim’s brother, Grant, was killed in a tragic accident in Sacramento, California. In early July, Jim gave a name and blessing to his first son, James, Jr., at church in Logan. It was a time of both profound joy and profound sadness.

Jim was thereafter commissioned a Second Lieutenant in the U.S. Army Quartermaster Corps in July, 1955. He received his officer training at Fort Lee, Virginia, and then served 2 years at the Auburn Depot in the State of Washington, where their second son, C. Edward, was born on October 27, 1956. Jim was promoted to First Lieutenant in 1957 before attending Law School at Stanford University for 3 years. Jim received the rank of Captain in the U.S. Army before completing his service.

After receiving his law degree from Stanford University, Jim practiced law for the next 60 years, not retiring his law license until 2020 due to health issues. He first had law offices in Palo Alto, and then Cupertino, California. He practiced mainly in corporate and real estate law, but also provided services in construction law, contracts, estate planning, probate, trusts, family law, and even some litigation and trial work. He also became involved in real estate acquisition and investment for himself and Jenay as well as for investor groups.

During this time, Jim and Jenay had four more children, Paul, Curtis, Jeanette, and William, while they lived in the Stanford Village, Menlo Park, and Los Altos Hills during the 1960’s. They moved to their home in Cupertino, California in 1972, remaining there for 48 years until August, 2020.

While living in Los Altos Hills, his oldest son, Jim, Jr., was discovered to have a brain tumor, which doctors did not believe he would survive. Jim extensively researched his son’s condition and found the best doctors for him. Jim and Jenay recruited their church congregation to fast and pray for their son. He was given priesthood blessings and defied the expectations of many doctors by later going on a mission, getting married, and living until 48 years old, far surpassing all predictions.

Each of his six children have followed their father’s good example by serving full-time missions for the Church and by remaining actively involved in their local congregations.

Jim is remembered fondly by each of his children as a caring and compassionate father who would always listen to their concerns and was there to assist them in any way he could. In fact, he helped finance most of his children’s college educations, never asking for or expecting repayment. He did this not only with his own children, but was generous to anyone needing help throughout his life, taking in the relatives and friends who needed a temporary place to live to get through a challenging portion of their life, or giving a rent break to a struggling single mother or a deferral to someone needing more time to repay a loan.

None of Jim’s children can remember him losing his temper in any serious way or having a serious argument with Jenay. He was always very even keel in his emotions and in his example for his children. He was never extreme, but always remained calm even when faced with severe financial crises and other family struggles. Jim was a great example of love for family, faith, and freedom. He will be dearly missed.

Jim was preceded in death by his parents, Edward and Lillian Andersen Hoffman; his brothers Howard, Don, and Grant; his sister, Kathryn Hoffman Powell; his son, James C. Hoffman, Jr. and his wife, Shannon Mann Hoffman; and a granddaughter, Rebecca Hoffman.

He is survived by his wife, Jenay Austin Hoffman, five of his children and their spouses, C. Edward Hoffman (Joy); Paul A. Hoffman (Cindy); Curtis B. Hoffman (Elizabeth); Jeanette L. Fife (Leslie); William M. Hoffman (Cherilyn); 26 grandchildren, 20 great-grandchildren, and 1 great-great-grandchild. The family wishes to express sincere thanks to the caregivers at the Legacy Village assisted living facility in Provo and Yarrow Hospice and Palliative Care for their kind and compassionate service to Jim before his passing.

A viewing will be held on Saturday, January 9, 2021 at Nelson Funeral Home, 162 East 400 North, Logan, Utah from 10:00 – 10:45am. Funeral services will follow at 11:00am. Due to COVID restrictions, in-person attendance at the viewing and funeral services are for family members only.