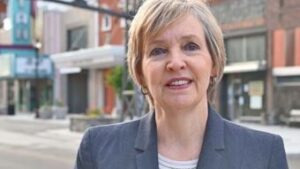 With an unexpected 30.07 percent voter turn-out, Daines won by a commanding margin of more than 1,500 votes over businessman Dee Jones.

“I’m honored and humbled by today’s vote,” Daines said late Tuesday, after receiving the news of the unofficial ballot count in the mayoral race. “I look forward to serving the citizens of Logan for another four years.”

“It appears that the voters approve of the city’s direction under its current elected officials,” she added.

Daines is a Cache Valley native and a graduate of both Utah State University and the University of Utah. Her previous political experience includes eight years as a member of the Logan City Council.

“I am very grateful to all of those who have supported me over the past four years,” the mayor emphasized.

In the next four years, Daines says that she hopes to focus her efforts on completion of the Center Block plaza, construction of a new library, improvement of transportation networks and the expansion of trails and parks.