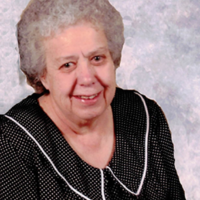 Gwen was born July 28, 1934 in Lewisville, Idaho to Alta Adeline Johnson and Fredrick William Chadburn. She was the second of six children. She grew up in Jameston, Idaho, across the street from the Jameston Chapel.

When Gwen was in third grade, she had Rheumatic Fever and had to spend much of that year confined to her bed. She had several recurrences of Rheumatic Fever throughout her life, but always came back stronger. Gwen graduated from Shelley High School in 1953. She was also a proud Seminary graduate. She especially enjoyed her Home Economics Classes and spent many hours in the school library.

Gwen also participated in the MIA program and had several church callings in her youth, starting as assistant chorister in Primary at 12 years old. She was a member of the Youth Choir.

After high school, Gwen became a telephone operator for Mountain Bell Telephone Company in Idaho Falls. Gwen met her husband Keith Lusk on a blind date. They were married for time and all eternity in the Idaho Falls Temple on March 23, 1956.

Gwen and Keith were blessed with eleven children: LaRue, Bryan, George, Kenneth, Paul, Steven, Alvin, Emily, Rodney, Samuel, and Daniel. Gwen and Keith raised their children on a small dairy farm north of Sugar City. They were proud of their family and taught them to work hard caring for the farm and animals. Gwen’s greatest joy in life was her family. She was the very happy grandma to 58 grandchildren and 46 great-grandchildren with 6 more expected this year.

Gwen was a life-long member of The Church of Jesus Christ of Latter-day Saints and served in many callings over the years. Some of her favorites were being Cub Scout Leader and doing Sealings in the Temple every week for several years.