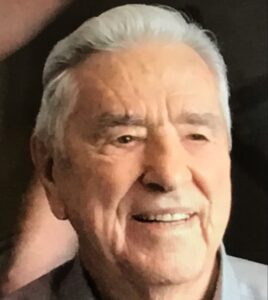 Glenn H. Perry, age 94, passed away in Brigham City. surrounded by his family on August 6, 2021. He had been hospitalized for pneumonia. He was born on February 26, 1927 in Preston Idaho to Ralph and Ruth Perry. He was the youngest of eight and arrived with his twin brother Lynn. He grew up on his father’s dry farm in Treasureton and attended school in Preston where he met his future wife Beulah Palmer.

Their courtship was interrupted by World War II, while Glenn served in the United States Navy, assigned to work stateside in an office in Illinois. After his release from the service, they were married on December 20, 1946 in the Logan Utah Temple of the Church of Jesus Christ of Latter-day Saints. Glenn spent his lifetime working with farm equipment for the International Harvester Company, Palmer Implement, ISU Vocational College, and Steed Case/International. They lived in Winder, Idaho; Bountiful, Utah; Pocatello, Idaho and Idaho Falls, Idaho, where he retired in 1992.

Glenn and Beulah had six children, four sons and two daughters. They loved to garden and gave to friends and neighbors, produce they grew. Their yard was always very well maintained and beautiful. Glenn played the trumpet in high school and continued playing after they were married. He played in a local traveling dance band, playing for dances throughout the Preston area and vicinity. He loved to dance as well. Glenn had a wonderful voice and participated in ward and stake choirs throughout his life. His love of music continues in his family with children, grandchildren, and great-grandchildren continuing that legacy, playing instruments of every kind and singing. He will be remembered for his silly songs sung to grandchildren on his knee. Glenn had a great sense of humor. He was always ready to share a good joke.

Fishing was Glenn’s favorite past time. While he was still employed, he carried a fishing pole in his vehicle all the time. After his workday ended you could find him along some stream or river wetting his line. Much of the family recreation was camping and fishing.
Glenn was always active in the Church of Jesus Christ of Latter-day Saints. He served in various organizations, leading and teaching. He was always supportive of the missionary service given by members of his family.

Beulah passed away in December 1992 and Glenn later married Jean Marie Smith. When Jean passed away, Glenn married Joyce Perry. They moved to Perry, Utah where they were residing at his passing.

Glenn is survived by his wife, Joyce; children, Paul, Christine Cramer (Dennis), Steven (Leslie). Susan Cramer (Paul), and Dale (Rachael) and daughter-in-law Nancy (Michael). 29 grandchildren and 107 great grandchildren. Glenn is also survived by the family of Jean Marie to whom he was grandpa Perry and the family of Joyce who so loving cared for Glenn and Joyce the past few years as they lived in their home in Perry.

He was proceeded in death by his parents, wife, Beulah; wife Jean Marie, son Michael, and his seven brothers and sisters.