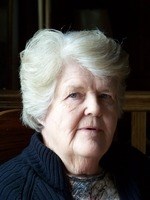 Georgia Christensen Lauritzen, 84, passed away peacefully on March 5, 2021, in Fernandina Beach, Florida, from complications of Parkinsonism. Georgia was a woman of quiet dignity and stalwart, loving support to her four daughters, thirteen grandchildren and seven little great grandsons. Each of her daughters claim their mother as their greatest inspiration for living a gracious and successful life.

Georgia was born on September 27, 1936, in Moroni, Utah, to Charles W. and Mary C. Christensen. After graduation from Moroni High School, Georgia moved to Logan, Utah, where she attended Utah State University and was a member of Chi Omega sorority. She graduated with a degree in Dietetics in 1959 and, after completing an internship at the Veterans Administration Hospital in Los Angeles, became a Registered Dietician. She worked for several years as a dietician in nursing homes along the Wasatch Front in Utah.

Through it all, Georgia continued her education, receiving her M.S. and Ph.D. from Utah State University, where she was employed for twenty-eight years as Extension Specialist, Professor of Nutrition and Food Science, and Associate Dean for Extension. She received the E. G. Peterson Extension Award in 1998. She was also awarded the Lifetime Achievement Award for Woman Over Sixty-Five from USU in 2007. Perhaps the best gift she gave her daughters was teaching them by word and deed that education is not only intrinsically valuable, but also brings independence for women.

She spent most of her adult years as a resident of North Logan, Utah, where she served on the Board of the Friends of the Library and the City Council. She relocated to Florida in 2014. Throughout her life, Georgia was a faithful member of the Church of Jesus Christ of Latter-day Saints and served without reservation in every way she was asked.

Georgia is survived by her four daughters, grandchildren, and great grandchildren; as well as brother, James M. Christensen (Leslee) of Moroni, Utah; Vern L. Christensen (RaNae) of Mona, Utah, and numerous nieces and nephews. She was predeceased by her parents, brother, C. Morris Christensen, and sister, Glenna C. Rea.