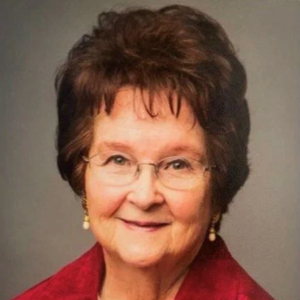 Our sweet and sensible Mom, Geneil Hughes Anderson, passed away after a short illness and rapid decline on June 16, 2022, four days shy of her 91st birthday.

Geneil was born at home in Mendon, Utah on June 20, 1931 to John O and Pearl Allen Hughes, joining two sisters and a brother. She had a happy childhood and was a bright and friendly girl. She helped out on the family farm and had memories of taking care of the garden and hoeing sugar beets.

When she was in school she was a good student and a popular coed who loved to dance. She met our Dad, Clyde Merlin Anderson, when she was 14 at a dance in Mendon. They courted until after she graduated from high school and married on August 2, 1950. Clyde was drafted soon after and they took off together to Ft. Riley, Kansas, where she had their first daughter, Marian. They moved back to Logan two months later and lived in the same house for nearly 70 years.

Geneil and Clyde eventually had five other children in Logan, Karen, Paul, Lorraine, Brian and Mark. She raised her children to work hard, see the best in others and always look on the bright side. She did wonders with a limited budget and always made sure we were well fed with home made and home canned food and she made plenty of our clothes. She spent many years working alongside Clyde at the family garden store. She would tie beautiful bows for chrysanthemums and decorate trees for Christmas along with selling seeds and plants.

Geneil never felt as accomplished as her sisters because she didn’t have any college education, but she spent her entire life teaching or instructing others in all sorts of home arts. She was the one who followed her mother in mastery of all sorts of cooking, sewing, quilting and crafting and was willing to share her gifts, talents and expertise with anyone who needed it, always happy to help. She taught classes in Relief Society, kids in 4-H, and was an example for all who wanted to know how to live a life of goodness and giving.

Geneil had a beautiful alto voice and sang in the Singing Mothers, The Towne Singers and in duets with Clyde at many church meetings and funerals. She held numerous Church callings, including Relief Society President. In her later years she loved serving in the Logan Temple as an ordinance worker.

Geneil was never idle, always doing “handwork” if she was sitting. She has done needlepoint, has crocheted or knitted beautiful white blankets for baby blessings, stitched intricate Hardanger embroidery pieces, and made dozens of gorgeous quilts for all the family and others. She was still piecing and binding quilts up to two weeks ago. Before her recent illness she still lived alone and tended her beautiful flowers and vegetable garden. And last Christmas she still made candy for the family after a lifetime of dipping her famous chocolates.

Her life has been characterized by service, generosity and kindness. She has always been the first one to help and the last one to take credit. She never wanted to be the center of attention.

She was preceded in death by her parents, siblings, Shirley, Keith and Carol, her husband, Clyde, a son, Brian, and two grandsons, Daniel and Patrick McCann.

A graveside service will be held in the Logan Cemetery on Wednesday, June 22, 2022, at noon.

We wish to thank CNS Hospice and Terrace Grove for their loving care and help through this difficult transition, Arrangements by Allen-Hall Mortuary, Logan.

Anyone wishing to share memories and stories of Geneil can send them to queenbeemarian@gmail.com to be included in her personal history.