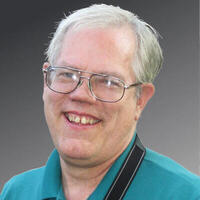 Gary Parry Ward was born in Malad, Idaho on April 1, 1956, to George Parry and Marilyn Ann Ward. He died of natural causes in his Salt Lake City home on December 20, 2021.

Gary was always mechanically minded. Before he graduated from high school, he had built a radio and was hired by a local company to help his father repair farm machinery.

Gary attended Malad High School, graduating in 1974. After that, Gary worked various jobs earning money to go on a mission for the Church of Jesus Christ of Latter-day Saints. He entered the mission home May, 1, 1976, and served in the Louisville, Kentucky Mission.

Gary attended Southern Utah State College (now Southern Utah University) and received a Bachelor of Science degree in Industrial Arts. He graduated in June 1984. While there, he was an electronics medalist at the Utah State VICA competition. He went on to represent Utah at the National Skills Olympics in Atlanta, GA, where he took third place in the area of radio and television. Two years later, Gary participated in the Utah Skill Olympics and was the gold medal winner in electronics products servicing. He went on to compete in the National Skill Olympics held in Louisville, KY.

After graduation from college, Gary worked in the computer center at the College of Eastern Utah (now Utah State University Eastern); as an Electronic Tech and Mechanic for Purolator Filters; as an Electronics Tech and Programmer for Precision Automation; and he recently retired from Weir Specialty Pumps working as a Computer Numeric Control Tech.

Gary was active in the Church of Jesus Christ of Latter-day Saints and willingly served in callings which included Stake Technology Specialist, Ward Bulletin Specialist and Finance Clerk.

Gary enjoyed home cooked meals, hiking, geocaching, electronics and repair, and new age music. He was in the process of moving back to the country and his childhood home in Cherry Creek, Idaho.

Gary had a close relationship with his mother. He was her confidant and fix-it man, and she was his best friend and ‘safe port in the storm’. They enjoyed many happy times together. Gary also enjoyed time spent with his siblings and their families.

We will all miss our ‘Gare Bear’—his hugs, laugh and love.

A memorial service will be held on Saturday, January 15, 2021 at 11:00 am in the Church of Jesus Christ of Latter-day Saints Malad 5th Ward Chapel located at 20 South 100 West, Malad, Idaho.

Interment will take place in the Malad City Cemetery.

Service will be live streamed at https://youtu.be/EXksUT1o52c