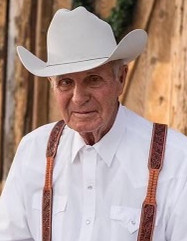 Our beloved father, grandfather, great-grandfather, and friend (Gary) Gearld Henry Rose passed away peacefully on Thursday, May 12, 2022, in Logan, Utah, at the age of 91.

He was born on August 30, 1930, in Ogden, Utah, the only child of Guy Axel Rose and Chrystal Keller Rose. Gary was a lifelong resident of Park Valley, Utah, a place he loved dearly. His childhood in Park Valley was one of hard work and happiness. He developed an early love for ranching, horses, cattle, and the land, a love that continued throughout his life. He also had a great passion and talent for sports, and became an excellent athlete in basketball, and track and field. Additionally he spent many years as a basketball coach in Ogden and Park Valley.

Gary’s education began at Park Valley School and continued at Box Elder High, Ogden High, Weber College, and the University of Utah culminating in a well-deserved degree from the “School of Hard Knocks.”

It was at Ogden High that he met and fell in love with his red-headed dancing partner, Dottie, who would become his eternal companion. Gary and Dorothy Jean Evans were married on August 22, 1948 and were later sealed for eternity in the Logan Temple on April 23, 1954. In mortality, they enjoyed nearly 67 years of marriage. Five children were born to their union: Gregory Guy (Wendy) Rose, Nancy Kathleen (Brent) Scott, Brent LeRoy (Janet) Rose, Christie (Scott) Sandall, and Sheri (Bob) Payne. His posterity also includes 20 grandchildren and 66 (soon to be 68) great-grandchildren.

Community and church service was the hallmark of Gary’s life. In addition to being a great father and grandfather, he served as ward clerk, high councilor, bishop, and in other callings in The Church of Jesus Christ of Latter-day Saints, as Utah Cattlemen’s President, Utah Beef Council chairman, Utah’s representative on the National Livestock and Meat Board, and president of various livestock, soil conservation, and irrigation companies. Gary was honored as the “Utah Cattlemen’s Rancher of the Year” and later as the Box Elder County honoree for the Ogden Pioneer Days “National Day of the American Cowboy.” He was a true cowboy and gentleman, and a friend to all he encountered.

However, Gary’s greatest honor and joy were his children, grandchildren, and great-grandchildren. He was deeply grateful for and pleased with each and every one. His passing leaves a hole in the hearts of his family and friends.

He is survived by his five children and their spouses and was preceded in death by his wife, Dorothy Rose, his grandson, Wade Brent Rose, and his parents.

Police searching for gunman in fatal shooting on NYC subway