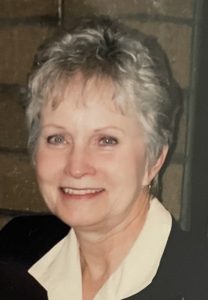 On Monday, August 1st, Gail Jensen Barr passed away after a 25-year off-and-on battle with cancer. Gail was surrounded by her husband John, her children, grandchildren, great-grandchildren, and many friends when Heaven received another angel.

Gail was born in Preston, Idaho on March 7, 1943, to Keith and BarDee Jensen. Growing up Gail was involved in many activities, a few of which included playing the piano, twirling the baton, and playing the accordion. Her love of music was instilled at a young age and eventually led to her playing piano in her dad’s, toe-tapping “Keith Jensen Band.” Her well-manicured hands never missed a beat while accompanying her grandchildren through many years of singing and playing instrumentals. Besides her love for music, she looked forward to her annual girlfriend trips, enjoyed crocheting, and spending time with family.

Gail raised 3 wonderful children, (ShaMe’, Lance and Tyler,) they were the melody in her life. In 1993 she harmonized her marriage for eternity to John Barr in the Logan, Utah temple. They spent many great years together traveling and spending time with family. In 2003, John and Gail served a mission in the Church Office Buildings in Salt Lake City, Utah. She was known for being the 1st Ward’s most beloved organist and choir accompanist.

Her parents Keith and BarDee Jensen preceded Gail in death, a son, Tyler Hemsley, a grandson, Jacob Kitt, and a great-grandson, Hoss Hemsley.

She is survived by her husband, John, and her 2 children, Lance Hemsley (Laurie), ShaMe’ Belew (Terry). Gail was a grandmother to 17 grandchildren and 26 great-grandchildren. She is also survived by three brothers and one sister, Jim (Bonnie) Jensen, Kelly (Cindy) Jensen, Phillip (Michelle), and Charmaine (Jerry) Harwood.

Interment will take place in the Preston Cemetery.