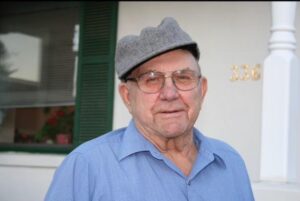 When Evan Shirley stepped through the veil from mortality on April 18, 2021, what a wonderful reunion there must have been! When you live to be almost 99 years old, many friends and family have gone on before.

Evan was born to Henry Wilford Shirley and Iva Langford Shirley on June 27, 1922, in Fish Haven, ID. He was the second of four children. His older brother, Cecil, was killed in WWII, both of his younger sisters, Norma Michaelson and Dalice Barker also preceded him in death. He was also preceded in death by a son in law, Thomas Rogers, and two granddaughters, Christi Crawford and Kaycee Reynolds Barnett.

Evan loved to tell stories of his childhood growing up in Fish Haven. There are many tales of hunting, fishing, and riding horses. However, Evan was taught to work hard and would tell us that when his friends wanted to go to the lake his grandpa would always say, “Of course you can go with them! Right after you weed this row of potatoes!” As an adult he still loved hunting, fishing and riding horses! He also continued working hard all of his life. Many times he had two or three jobs at the same time. He often said that his favorite job was underground mining! Many times he would work on his farm until long past dark after finishing a full shift at the mine. Never content to be idle, even into his late eighties he was mowing peoples’ lawns and helping Hunsakers move and brand their cattle. He loved gardening and always had a beautiful, well tended and very productive garden including his favorite, raspberries!  As a teenager, Evan joined the CCC and had many experiences surveying, building roads and trails, and even fighting fires up in the McCall ID area. He made lifelong friends during that time.

Evan married Geraldine Benson Shirley on January 4th, 1943. On August 5, 1948, at the Logan Temple of the Church of Jesus Christ of Latter Day Saints, they were sealed together for time and all Eternity. Years later they were called to serve as Ordinance Workers in the Logan Temple. Dad always said that was the happiest few years of his life. He had a strong testimony of the Gospel and loved being in service to others.

Evan and Geraldine are the parents of five children: Linda (Tom) Rogers, Jeri (Frank) Crawford, Bill (Jan) Shirley, Nancy (Rob) Reynolds, and Mike (Dottie) Shirley. There are many grandchildren, great grandchildren, and even great great grandchildren! Nine of these children are also named Evan. He was so loved by all of us and will be greatly missed!

Evan entered the Navy in January of 1945 and served in Guam and Rhoda. He said the hardest thing he ever had to do to leave his wife and daughter, Linda, but he felt he needed to serve and was grateful ever after that he did. He loved his country and taught his family to love it also. He was so glad he served and said his only regret was that he couldn’t volunteer earlier. He was the oldest WWII survivor in the Bear Lake Valley. Evan’s last week was spent in the Bear Lake Memorial Hospital surrounded by his family where they experienced many tender mercies, and where he received exceptional thoughtful care from the medical professionals involved. Prior to moving to the hospital he also received such tender care from the staff in the Skilled Nursing Facility at Bear Lake Memorial. We express our sincere gratitude to each of these special angels.