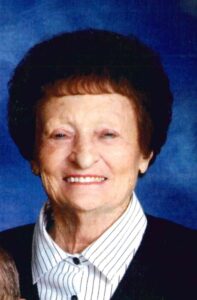 After surviving colon cancer for eight years, and fiercely battling pancreatic cancer, Eleanor Elizabeth Skroh succumbed her earthly bonds at her home in Montpelier, Idaho to join our Lord in Heaven.

Eleanor was born and raised in WaKeeney, Kansas, where she was graduated from WaKeeney High School in 1950. After high school, she worked at various jobs, including being an usher at the local theater and at family businesses.

It was love at first sight for Eleanor and Wilbur after meeting at the local roller rink in WaKeeney. They came to know each other by sharing time at the rink and spending time with Eleanor’s extended family.

The country “out west” offered greater job opportunities at the Atomic Energy Commission, now known as the Idaho National Laboratory near Arco, so Wilbur moved to Idaho, later joined by Eleanor. She was employed at the Kraft Cheese Plant in Pocatello, Idaho.

Eleanor and Wilbur were married at St. Anthony’s Roman Catholic Church on July 19, 1952, and to this union were born Sharon, Ron, and Karen. Sharon and her husband, Rob, now live in Challis, Idaho. Ron and his wife, Maxine, reside in Pocatello, Idaho, and Karen and her husband, Mark, live in Rapid City, South Dakota. The family moved to Montpelier, Idaho in 1963. This move allowed Wilbur to work full-time for Utah Power & Light, and for the family to enjoy the community and outdoor recreational opportunities.

Through the years, the family spent quality time together enjoying camping, fishing, and hunting any time possible in the nearby Caribou National Forest. Eleanor was an enthusiastic fisher woman and enjoyed deer, elk, and moose hunting. The family became involved with horses and horse riding, participating in the Horse 4-H program in Bear Lake County. Eleanor eventually became the leader of the Hoof Beats Horse 4-H Club, a position she held for several years.

Eleanor worked for the Montpelier Laundromat and Dry Cleaners for a number of years where she met numerous people, making many friends from all across the Bear Lake Valley. She was an avid Bingo player at the local weekly Bingo games, where she also enjoyed the company of many like-minded friends.

After retirement, Eleanor and Wilbur refused to adopt a sedentary life. Both continued to exercise daily by either bike riding or working out on their exercise equipment. Both worked diligently to maintain their yard and property. Fishing, camping, and hunting occupied their time during their summers and fall. She was a proud grandmother of four grandchildren: Kira Skroh, Nolan Skroh, Steve and Michelle (his wife) Vedder, and Matt and Rachel (his wife) Vedder, and two great-grandchildren, Adalynn and Ethan Vedder. Her husband, Wilbur (Willie), all of her children, grandchildren, and great-grandchildren survive her, as well as her younger sister, Berniece Shank, who lives in Mandeville, Louisiana.

She was a loving mother, grandmother, and great-grandmother and all of her family and friends sorely feel her passing. Eleanor was an active member of the Blessed Sacrament Catholic Church. She also belonged to the Blessed Sacrament Ladies League in Montpelier and treasured their friendship and love. Eleanor will be interred at the Montpelier Cemetery after her Funeral Mass at the Catholic Church.

In lieu of flowers, the family suggests donations in Eleanor’s name to the Bear Lake County Meals on Wheels program and/or the University of Utah’s Huntsman Cancer Institute.