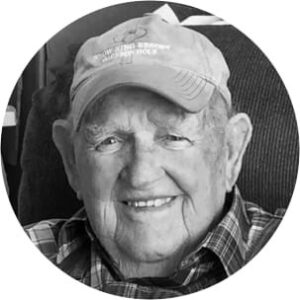 Edward Emanuel Valcarce passed away at his home in Brigham City, Utah from natural causes on May 22, 2022 at the ripe old age of 94. He was loved by so many for his friendliness, kindness, and great sense of humor. His enjoyment of visiting with people far and wide earned him the nickname “the beloved can man”.

He was born on Dec. 29, 1927 to Avonia and Casiano (Chris) Valcarce. He married his sweetheart, Ivie Wells on May 31, 1947 in Preston, Idaho until her passing in 2006. Also preceded in death were his parents and siblings, Joseph Valcarce, Juanita Valcarce, Arland Valcarce, Robert Valcarce, and Paul Valcarce.

During his long life Ed was in the Merchant Marines during World War II, became a fur rancher and fur buyer and later opened his recycling business. he loved working and staying busiy. His hobbies included hunting, fishing, outdoor adventures, gambling, traveling, people watching and spending time with his family especially teasing his grandchildren.

We would like to thank the teams from Rocky Mountain Home Care and Hospice for all their help and support.

He was laid to rest in the Brigham City Cemetery next to his one and only, Ivie on their 75th. wedding anniversary, May 31, 2022.