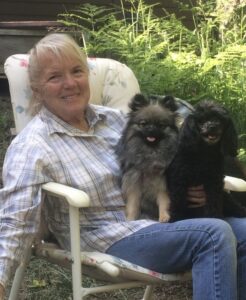 Earlene J (Ansley) Hill unexpectedly passed away on the 2nd of December, 2021, she was surrounded by her beloved doggies.

Earlene was born on May 7, 1943, and raised in the Ogden area, the daughter of Earl & Elizabeth Shafer. Earlene was the oldest of 9 siblings.

Earlene worked for many years at Volvo White Heavy Truck Mfg., in Ogden, UT. She moved to Perry City where she grew her own fruit and ran Hills Fruit Stand, she was known for her award-winning peaches and huge black berries. While living in Perry she developed Hill Haven Subdivision with her husband Blake, she also helped develop Cherish View Subdivision with her sons Danny and Cory. Her greatest joy was rescuing and caring for many dogs and cats. Earlene enjoyed gardening (she was known for having a green thumb). She enjoyed making Christmas Wreaths and other Christmas decorations for family and friends, she also enjoyed collecting antiques. She loved driving hot rods, her most recent was her silver corvette.

Earlene is preceded in death by her parents: Earl & Elizabeth Shafer and one brother: Dave Shafer.

Following Earlene’s wishes we will have a celebration of life that will be held at a later date. Services entrusted to Myers Mortuary of Brigham City.