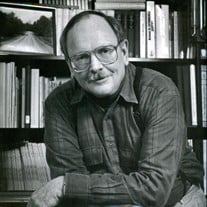 Dr. Donald Wilson Roberts, 88, of Logan, Utah, passed away on May 2, 2021 of natural causes and following an extended illness.

Don was born in Phoenix, Arizona, on January 20, 1933 to Alpha Wilson Roberts and Rubye Clotilde (Finklea) Roberts. That day, it snowed a record-breaking inch. He lived in Phoenix through his first 2 years of college at Phoenix College and Arizona State University. He spent two summers working with a chemical company called Arizona Fertilizers, surveying pests in Arizona cotton fields, where he learned from the wise supervisor that natural insect diseases such as viruses can serve as effective pest control. This experience inspired him to choose entomology and eventually insect pathology as his profession.

Don spent 2 years on a mission in western Canada for the Church of Christ of Latter Day Saints. While there, he helped recent immigrants adapt to the Canadian culture. Don then moved to Utah to attend Brigham Young University, where in 1957 he completed a B.S. with a major in Zoology and a minor in Botany. In his senior year, he took a mycology course, which sparked his fascination in combining the disciplines of entomology and mycology. After graduation, Don was offered a research associate position at Iowa state University, working on the biology and chemical control of a particular species of leaf roller insect. While in Ames, Iowa, he met Mae Strand, who was there studying for an M.S. degree in child development, and who was one of the few young woman on campus who could keep up with him on the dance floor. A friendship developed that blossomed into something more, and she remained his wife and favorite dance partner for their 62 years of marriage.

After Don completed his M.S. at Iowa State in 1959, he obtained a National Institutes of Health (NIH) Professional Fellowship to study with renowned insect pathologist Edward Steinhaus at the University of California, Berkeley. Mae and Don married within Don’s first year at Berkeley in 1959, and their first child, Marc Donald, arrived 15 months later.

Don’s first international experience was a Postdoctoral Fellowship at the Swiss Federal Institute of Technology in Zurich, Switzerland (1964-1965). After his time there, Dr. Roberts was invited to be the insect pathologist at Boyce Thompson Institute (BTI), a well-established non-profit research institution, which at the time was located in Yonkers, New York. Don worked at BTI in Yonkers for 16 years, rising from Assistant to Full Rank Insect Pathologist (1974), and becoming very involved in international research. During this time in Yonkers, his daughter, Sara Judith, was born. Eventually, BTI was invited to affiliate with Cornell University, and in 1977, Don moved his laboratory and family to Ithaca, New York. In 1996, BTI appointed Don as the Roy A. Young Scientist to mark how high his profile visibility consistently enhanced the scientific reputation of the Institute. Don was also an adjunct professor in both the Departments of Entomology and Plant Pathology at Cornell University.

Don is a founding member of the Society for Invertebrate Pathology (SIP) and served as its president from 1988-1990. He was recognized and rewarded by many professional societies for his extensive contributions to entomology, and especially to insect pathology. These awards include a Fulbright Senior Research Scholarship to Australia (1985); and the L.O. Howard Distinguished Achievement Award (1989) from the Eastern Branch of Entomological Society of America; and SIP Founder s’ Lecture Honoree (2009). Moreover, the fungal insect pathogen that he studied most was renamed Metarhizium robertsii in his honor.

Don was a passionate promoter of insect pathology and biological control throughout the world. Don journeyed to 64 countries to promote biological control of insects by making presentations, helping with research, and collecting pathogens, especially in developing nations. He supervised major international research projects in the Philippines and Brazil.

Don was very approachable and willingly helped students and pathologists just launching their careers. With the help of Mae, he took excellent care of his staff on a personal and professional level; earning the nickname “Uncle Don.” A talented storyteller, he enjoyed using stories about his own adventures as parables to teach others about both science and life. He was the star of the dance floor and an avid and talented photographer.

Don retired from BTI in 1997, and at the age of 64, went to work as a Research Professor in the Department of Biology at Utah State University, setting-up a new lab there. Along with his focus on fungal pathogens, he delved into a completely new subject when he initiated a research program on the parasite that causes Whirling Disease in fish. In River Heights, Mae and Don established a new home, where their son Marc installed a dance floor so they could enjoy dancing together as well as teach others. West Coast Swing was their favorite. Part of the reason for this Utah location was to be closer to his children and grandchildren as well as Mae’s family.

Don loved to take his grandchildren into the field, and many a frogs, snakes, and insects were caught on their adventure. Don always had the right equipment available to handle the task at hand, and if he didn’t, he improvised.

Over the course of Don’s life and career, he played many roles and played them beautifully: loving husband, father, grandfather, administrator, researcher, teacher, mentor, and peacemaker. All of his personal and professional activities have been the direct outgrowth of his deeply held belief that it is his duty to help improve the lives of other people. He was a very supportive person that encouraged his family, those who worked for him, and many others to explore the world and make it better. In this spirit of service to and love for all, and in his professional dedication, Don is a role model worthy of emulation.

“His legacy is for people to know how successful scientists are made and how he or she can contribute to the society, truly globally. He is known all over the world… I think there are very few people that you meet in life who are an inspiration, and he is one of those people.” Lokesh Joshi, friend and colleague.

In memory of Don, a get-together for family and friends will be held Saturday, June 12th from 3-5 PM at the Logan River Golf Course.

Thank you, Dr. Sharp and Dr. Otrusinik for trusted care over the past several years, as well as the staff of Logan Regional Hospital, Maple Spring, McKay Dee Hospital, and Sunshine Terrace Foundation for providing excellent care during his final weeks. Also Nelson Funeral Home for much appreciated service to the family.