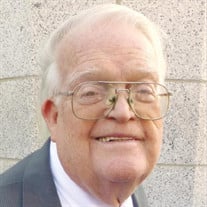 A lifetime of hard-work and service to others was completed as Dewaine Edward Symons passed away peacefully on July 29, 2021 at Blacksmith Fork Assisted Living in Hyrum, Utah. Born February 15, 1937 to George Daniel Symons and Margaret Williams Symons. He and his four brothers (Terrel, DelRae, Lynden, Dean) enjoyed a fun childhood growing up on the family farm in Lava Hot Springs, Idaho. His sister, Carolyn remembers being teased by her older brothers. Dewaine learned to work hard and enjoyed the livestock, especially riding his white, Welsh Pony named Bunny.

Following Jesus Christ’s example of kindness, love, and service was a way of life for Dewaine. He chose to serve a 2-year mission for the church of Jesus Christ of Latter-day Saints in 1957. He was called to serve in the East Central States Mission, which included Kentucky, Tennessee, West Virginia and parts of 6 other states. He always cherished his faith and gladly served in various callings.

Education was very important to Dewaine. He received his Bachelor and Master’s degrees in agriculture education from Utah State University. While completing his student teaching in Spanish Fork, Utah, he stayed with his Uncle Joe Nathaniel Symons, whom he admired. He spent 6 years teaching secondary education in Idaho and another 6 years teaching in California. He worked for 20 years at Utah State University. Life-long learning was important to Dewaine. He was continuously reading to improve his knowledge and skills. He even took classes at the local Technical College later in life.

Dewaine has a love for music. He played clarinet in the North High School and USU marching bands. He also participated in the choir programs whenever possible. He met the love of his life Sylvia Swainston in Institute choir while attending USU. They were married for time and all eternity June 22, 1960 in the Logan, Utah temple.

The Symons family began to grow in Idaho. Later they moved to California. As they completed their family of 12, they made their home in Smithfield, Utah. They have 10 children (Edward, Brian, Kall, Ila, Tonya, Samuel, Rose, Holly, Cindy and Maria), 25 grandchildren, and 6 great-grandchildren.

Dewaine always put family first. After a long day of work, he made time to help around the house. Playing with the children, helping with homework, washing the dishes, and reading stories were a few of the ways he showed his love through service. His children enjoyed it when he took them camping up Smithfield canyon and played baseball. His children fondly remember their dad singing while doing dishes and whistling while shoveling the driveway. Dewaine had a knack for fixing things and used every opportunity to patiently teach his children useful skills.

In later years Dewaine enjoyed serving in the senior companion program in Cache Valley. Along with his sweetheart, Sylvia, they would visit elderly people in the community and take them to appointments. As they aged, Dewaine took wonderful care of Sylvia. Their fun relationship and great sense of humor brought them happiness throughout their life together.

A few years ago, Dewaine and Sylvia sold their beloved home and moved to Blacksmith Fork Assisted Living Center. Dewaine was so grateful to the wonderful staff there, he truly loved living there. He tried to remember each of the workers’ names. He wanted to adopt the young ladies, and referred to them as his daughters. He participated in activities provided by the assisted living center and looked for simple ways to serve, often escorting forgetful residents to their rooms. He made many friends there who helped ease his pain after losing his dear companion last November. Dewaine and Sylvia loved being together and missed each other dearly whenever they were apart. Surely there was a sweet reunion between them last Tuesday.

We believe that he was welcomed home by his Savior, Jesus Christ, his beloved wife of 60 years (Sylvia), brothers (Terrel and DelRae), grandson (Jeremy), and many other spirits who touched his life.  Dewaine is loved and will be missed by his children, grandchildren, great grandchildren, his sister (Carolyn) and two brothers (Lynden and Dean) along with those friends and others who were blessed to be a part of Dewaine’s life.

The family would like to thank Blacksmith Fork Assisted Living staff and Community Nursing Services for the care and services.

Friends and family are invited to attend or participate via Zoom. Bishop Crossley of the Smithfield 22nd Ward will conduct. To watch the funeral via Zoom click on the following link: https://us02web.zoom.us/j/83971469495?pwd=V3ZxZ1JxK00wZEZMNUhmRjBwS1k1Zz09