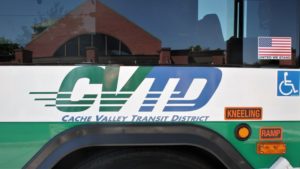 LOGAN — As Cache Valley continues to grow, it will, of course, mean more traffic on streets and highways.

Some estimates project 66 percent more people in the next 30 years. But Cache Valley Transit District (CVTD) is continuing to evolve to meet the challenge.

On KVNU’s For the People program on Monday, CVTD board member Patrick Jenkins said the transit district is all about balancing a robust, reliable system while making it a convenient system.

“Functionally we run three different businesses inside the Cache Valley Transit District. You see those trunk routes, the Loop, the big fix bus routes that we run. Known to a smaller segment of the population is the para-transit, that’s getting those that have special needs to whatever appointment they have or need. And then, up and coming, soon to be released, is going to be our flexible transit,” he explained.

Jenkins described that as an on-demand type service, more of a ride share, somewhat akin to Uber.

“So, we haven’t been able to launch that quite yet, largely due to supply chain issues, but we’re making big progress. And the real push here is to make transit more convenient, get you where you want to go but get it there so it’s a lot easier than it used to be. People are a lot more cognizant about traffic, about how long it takes to get places, about parking. And the Cache Valley Transit District solves some of those problems.”

Jenkins said, over the last month or so, they have launched an app that helps riders plan their trip. He said, from that app, comes data feeds that can load into platforms  such as Google maps and Apple maps.

CVTD has also launched an automatic voice-over announcer system that will tell riders what stop they are arriving to.