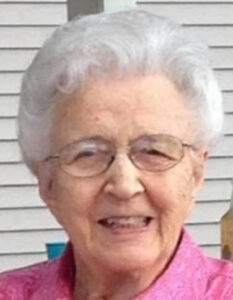 Cleone Cochran passed away May 22, 2021 at the Legacy House of Taylorsville Utah where she had lived for 3 weeks. Previous to that she resided in her home in Montpelier where her children cared for her after health problems ended her 14 month stay at the Bear Lake Manor last August.

Cleone (along with her twin Ione) was born to Ivan King Rigby and Sarah Josephine Wight in Sublet Idaho June 10,1924 at the home of their Rigby grandparents. Cleone and Ione had 2 older and 2 younger brothers. Her brothers were Henry, Kay, Don and Lee Rigby. The family lived in Juniper Idaho and Brigham City Utah before buying a ranch and settling in Pegram, Idaho.

After finishing High School, Cleone trained as a nurse at Budge Memorial Hospital in Logan for 3 years. Then she married her sweetheart Jack Cochran in the Salt Lake temple on Sept. 20, 1946. The couple raised their family of 4 on the Cochran family ranch in Pegram.

When the Cochran brothers reluctantly sold their ranch in the fall of 1988, Jack and Cleone bought and moved into a home in Montpelier. Here they made new friends and enjoyed their association in their LDS ward. Cleone remained in this home after she was widowed in 2012 until moving to the Manor in May of 2019.

Cleone was a nurse at Bear Lake Memorial Hospital for 28 years (including 3 years as assistant director and 3 years as director of nurses). During this career she made many good friends. After retirement she volunteered for the hospital auxiliary and continued her interests in gardening, genealogy extraction, handwork–especially quilting, and reading. She devotedly cared for Jack as he experienced various health problems during the last several years of his life.

She was preceded in death by her son Bruce, her husband Jack, her parents and each of her siblings.

The family thanks Encompass Hospice from Pocatello and Salt Lake and the staff at Legacy House and Bear Lake Manor who assisted Cleone and supported her family during the last chapter of her well-lived life.

Funeral services will be held on Wednesday, June 2, 2021 in the Montpelier 1st/4th Ward Chapel.