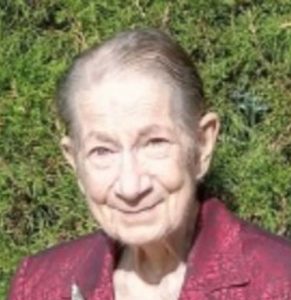 Clara Lavina Foutz Crockett, age 91, passed away on July 26th peacefully at home.  She was born May 18, 1931, in Kirtland, New Mexico, the daughter of Jesse Jerome Foutz and Clara Ashcroft. She met her husband George L. Crockett at Utah State University, and they married in the Logan temple on November 10,1950.

We do not mourn for a life well lived. In fact, we find relief for her, because for someone who has done so much, it was difficult for her to resign herself to the sedentary life that is, all so often, brought about by age, made harder because her significant other, her husband, George was not with her.

But she did live life to the fullest. Putting family first and making sacrifices that we may never know of. As we look back, now being parents, we understand some of those sacrifices. But she never considered what she did for her children sacrifices.

One of her dreams was to have a big family. The other was to travel the world. When her husband heard these two dreams he laughed, telling her that they were exclusive of one another, especially on what an educator could make. But she did have a large family AND she did travel the world. Taking several months, after living in Taiwan, to visit India,Thailand and travel Europe. But they did more than travel. She lived in Taiwan, Spain, Peru, and Turkey.

One of the other dreams she had was to teach dancing. She shared her love of dancing with her children. She taught dancing at Aims college in Greeley Colorado. And, even had her own aerobics program on TV for 5 years that ran for more than 10 years. Everywhere she went, including overseas, she taught dancing, ballet, ballroom, country western, aerobics and English. She had dance studios in Preston, Idaho, Red Bluff, California, and Greeley, Colorado and had venues where she taught in Peru, Taiwan and Turkey.

She loved the gospel, and she served everywhere she went, Including returning to Istanbul,Turkey, a second time to serve a full time mission with George. There, they worked with local leadership and brought in incubators and needed medical supplies for newborns, as well as large container loads of books for the Air Force Academy, and Kulelie Military school where she also taught English classes as a regular teacher. She did all of this while raising 9 children who, as with all good parents, they were the source of her greatest joys and greatest heartaches. She loved and was loved in return everywhere she lived. By any standard and all accounts, hers was a long and amazing life, well lived.

After all she has done, if anything, she would tell us something along the lines that she has earned the right be at peace, next to her beloved husband, until the resurrection.

Of course, we will miss her, but we also know that this is her next step in her eternal progression and that we will be together again as a family when our time comes.

She was preceded in death by her husband, George L. Crockett, and two sons, George Crockett Jr., and Dave C. Crockett (Marion).

The services may be viewed live on Friday at 11 am (MST) by clicking on the link in her obituary at webbmortuary.com.

Interment will be in the Whitney Cemetery.