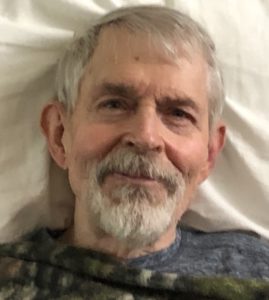 Born in Salt Lake City in April 1942, Calvin was the son of Faye Glover, a homemaker and, later, an employee of Zions Bank; and LaMar Petersen, a piano and organ teacher and director of the Mozart School of Music in downtown Salt Lake City. Both parents are deceased.

Calvin grew up on the avenues with three rambunctious brothers and two sisters. He attended Lowell Elementary, Horace Mann Jr. High, and West and Olympus High schools, graduating in 1960. He later received a B.S. in Business in 1965, an M.S. in Educational Psychology in 1969, and a Ph.D. in Clinical Psychology, Evaluation and Measurement in 1971—all from the University of Utah.

In 1969 he married fellow U of U graduate Sharon Christensen, and they eventually had two children, Dane Paul, who currently resides in Mantua, Utah, and Britt Christina, who lives in Arlington Heights, near Chicago, with her husband David Boehm and their two boys, Kieran (9) and Jude (6).

Calvin began his career while still in graduate school doing an internship in clinical psychology with the Utah Division of Mental Health and working as an assistant in the Peace Corps/Job Corps. In 1971, when his wife was accepted into the graduate program in history at Stanford University, the family moved to California where he worked as a consulting psychologist at the URS Research Company in San Mateo.

Eventually the family moved to Pebble Beach where he served as a research psychologist at the Defense Language Institute in Monterey. He directed the development of DLAB, one of the standard aptitude batteries for language learning, which is still in use throughout the Armed Forces and for which he earned the Department of Defense Award for Outstanding Achievement in Research and Development. He also taught courses in psychology at Chapman College and Golden Gate College.

Upon his family’s return to Utah in 1976, career opportunities drew him to Logan. They settled in nearby Mantua, a quiet town surrounded by mountains covered with brilliant autumn colors. There, Calvin fulfilled a desire to have his own apple orchard in memory of the farm and nursery that his maternal grandfather once owned in Midvale, Utah, and of the fun times he had had there as a child.

Calvin served as director of the Pain and Stress Clinic at Logan Regional Hospital, as an occasional adjunct professor at Utah State University, but mainly as a consulting psychologist with LifeSpan Mental Health Services until his retirement in 2007. He was an insightful and dedicated psychologist who counseled hundreds of clients.

Calvin was also a talented writer, publishing articles in several professional journals including the Journal of the History of Ideas and the Journal of Humanistic Psychology. He wrote one book and was working on another when he passed away.

Calvin loved sports including skiing, hiking, fishing, and especially golf. He worked continually to improve his swing, and one year won the Mantua golf tournament. During his golfing career he made three holes-in-one. But his favorite sport was undoubtedly basketball. He was a Jazz fan who not only loved watching games on TV but also regularly played the game at the gym. At 6’ 3” he was proud of his ability to dunk the ball.

Calvin will be remembered by his children as a fun-loving father and grandfather. He enjoyed a good laugh, and would tell the same old family jokes on trips to St. George with his family. Despite his waning mobility, he enjoyed entertaining his grandkids when they visited him. He once allowed a very young Jude to feed him French fries, ordering his gramps to “Eat it, Gwampa,” then let the fries dangle from his mouth, sending everyone into a fit of giggles. He listened patiently to Kieran’s long monologs about his adventures in gaming and offered comments that made Kieran feel like the most important little guy in the world. Calvin webcammed with his grandkids almost every weekend and would laugh and cheer on the boys when they danced around the room, sang songs, and told stories. He didn’t get to spend nearly enough time with them, as they lived in faraway Chicago, but that didn’t mean he loved them any less. He had giant canvas photos of both grandkids on his bedroom wall. We like to think they were one of the last things he saw when he passed from this life.

He and his daughter Britt shared a special connection through music. He loved to listen to her compositions and always encouraged her efforts. Classical music was his faithful, constant companion, but never more so than when he was robbed of his mobility. As the old nursery rhyme reads, “…he shall have music wherever he goes.”

When Calvin was no longer able to work, due to his disease, he resided in a series of assisted living facilities in Salt Lake City and Roy, until he was referred to a private nursing facility in Farr West, where he received personal care until the day of his passing.

Above all, Calvin was a fighter. He railed against the U.S. health care system that impoverished and neglected its citizens. He wrote letters to authorities and researched alternatives, even turning to health care entities in foreign countries for help. He once (jokingly) said he was angry at his ancestors for ever leaving Sweden and Denmark, where health care is a right, not a privilege. But he also did everything he could to mitigate his decline. He continued to exercise, swim, participate in therapy and undergo biannual analysis by a physician at the U of U Neurology Clinic.

Calvin may have lost his ability to walk, but his mind was razor sharp. He spent his days on the computer pursuing his interests, which included doing research on the Internet, listening to classical music, and competing against his sister Linda in online Scrabble games, which he invariably won. (His sister teasingly accused him of cheating.)

Thanks to his research and study he was knowledgeable about world history, science, religion and politics. While Calvin was a serious scholar, he also had an infectious sense of humor, finding amusement in human foibles and the absurdity of life. When confronted with troubling news or any farcical situation, he would inevitably comment, “It’s all part of life’s rich pageantry.”

Calvin will be sorely missed by his family and friends, who are forever grateful to have known him and been a part of his life. Special thanks to Hannah Anderson and her team of caregivers at Memory Lane Care Home and to Hearts for Hospice for taking such good care of him during his last days.  Thanks also to Mike Neilson of Smithfield, Utah, for his care, concern and devotion to Calvin over the many years of their friendship.

Funeral services will not be held due to COVID-19; the family will commemorate Calvin privately.

In recognition of Calvin’s remarkable life, donations may be made to the National M.S. Society.

Condolences and memories may be shared with the family at Aaron’s Mortuary.