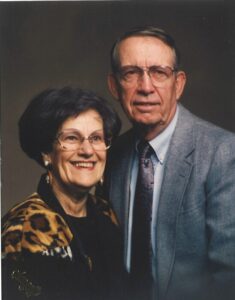 Beth Kerr Bailey Shaw, 95, of Ogden, Utah passed away May 26, 2021 at The Auberge at North Ogden Assisted Living of causes incident to age and cancer.  She was born March 22, 1926 in Wellsville, daughter of Elmer Hawkins Bailey and Mary Owen Kerr.  Her mother died when she was two years of age and Elmer later married Edna Walker.

She received her early education in Wellsville where she was raised by her grandparents, Mr. and Mrs. Robert J. Kerr.  She moved to Eden to live with her father and stepmother graduating from Weber High School.

Beth was employed at the Navy Base and while attending Weber State College, she worked at the Utah Adjutant General Depot.  Years later after receiving her Bachelor’s degree in Elementary Education, with a specialty in music, she taught at Grandview, Lincoln, Carl H. Taylor and Mound Fort Middle School.  She taught private piano, organ, and voice lessons and at the local group piano labs.

She held numerous church callings in the ward and stake levels in music, speech and drama.  Alongside her husband they served as temple workers in the Ogden Temple.  She is “the Last of the Bailey Gang” having been preceded in death by her two brothers, James Kerr Bailey and Elmer Kerr Bailey and one sister Margaret Kerr Bailey (Betty).

A special thanks to the staff of The Auberge at North Ogden and Hospice4Utah, especially Russ and Terra.

Funeral service will be live streamed.  To watch, scroll to the bottom of Beth’s obituary on Tuesday, June 1, 2021 at 2:00 p.m., www.myers-mortuary.com where condolences may also be sent to the family. If unable to watch at this time the service will be on Myers Mortuary website indefinitely.