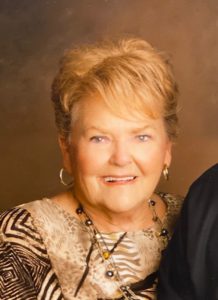 Audrene was born June 29, 1928 in Brigham City Utah to Grover and Eva Adams Harper. The origins of her first name seemed to have foreshadowed Audrene’s future as a beautician and not as a farmer of the land or a dairy farmer as in the case of her brothers Neil and Ezra. Her younger sister, Treva, was also creatively named.

Audrene spent her first five years living in Honeyville and later moved to Brigham City. The family then moved to Corinne when Audrene was in the ninth grade after her parents bought farmland. She attended school in Brigham City and graduated from Box Elder High. After her graduation, she attended beauty school in Ogden and worked a year and a half at a beauty salon in Brigham City.

She married Jay Yates in 1947 after Jay served 4 years in the Navy. It is our family’s understanding that she married Jay most likely because Jay was the star of the baseball team that her father Grover coached. She could have married any other player on the team–but Jay stood out. Her love of sports continued and were a big part of her family’s life.

Audrene and Jay moved to Layton when Jay began working at Hill Air Force Base. They bought a home on Colonial Avenue where their children, Chip (officially known as Jay), Kevin, Bruce and Tanya were raised. A new home was built on Gentile Street that included an area of the home for her beauty salon. Audrene built up many clients at her home salon and soon moved her salon out of the home to downtown Layton. She eventually built up her practice to three salons and a beauty school.

Audrene won many hair styling awards over the years; it was during this time, that Chip and Kevin were firmly convinced that on one occasion Marilyn Monroe was in the living room dressed as a Bomarc Missile having pictures taken as one of her models. It was actually Frances Frost as Miss Bomarc. Audrene’s styling skills came in handy working with Tanya’s tight, curly hair but were wasted on the boys since the fashionable “buzz cut” was not learned or taught in beauty school.

Jay passed away in 1971 at the age of fifty. She then wound down her business and took up golfing full time. She won two Club Championships at Davis County Golf Course. She loved to sew and crocheted numerous beautiful afghan blankets for the extended family over the many years. She was a talented artist and took up oil painting after her retirement. She loved to raise flowers, and her refusal to let them die required her to transport them with her back and forth when she traveled from her St. George home to her home in Star Valley. She was often heard to say, “Ray, leave room for my flowers”.

Audrene met Ray Wayman on a blind date, and they were married in 1987. Ray was truly a wonderful husband and father to her and her family. Ray had four children of his own. This marriage combination leaves a loving legacy of a numerous number of grand and great-grandchildren. The latest count for Audrene is 22 grandchildren and 66 great-grandchildren. Audrene amazingly could remember all of the birthdays and made contact with all family members, but sadly (family joke), she would sing Happy Birthday to each over the phone. Many very good family traits and talents were passed down to her family but a singing voice was not one of them.

Family reunions in Star Valley were a big part of her life and have been sorely missed. Her home in St. George was the site of many family get togethers and short family vacations. The smell of sour dough pancakes cooking on the stove has been sadly missed by all. Ray and Audrene went on three church missions. One to Cove Fort and two to Cody, Wyoming . As members of The Church of Jesus Christ of Latter-day Saints, they were very active and served as missionaries in most of the wards they attended.

Her greatest joy and the main legacy that she passed on to us all was the love of family. Audrene is survived by children: Chip (Jay) and Colleen Yates, Kevin and Marlene Yates, Bruce and Debbie Yates, Tanya and Kevin Garn; step/bonus children: Ken and Shayni Wayman, Earlene and Terry Cooper, Rodney Wayman, and Helen and Eric Manning.

A private immediate family funeral will be held on Tuesday, January 12, 2021 at 11:00am at Layton Lindquist Mortuary.

The funeral can be accessed over the internet through the Lindquist Layton Mortuary website. Because of COVID, there will be no visitation services.

Burial will be in Brigham City Cemetery.

In lieu of flowers, please reach out to someone in need as Audrene would do.