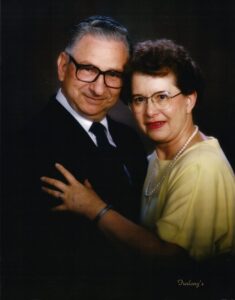 VerLee lived on the same property in Brigham City her entire life. As a child alongside her older sister LouVell, VerLee helped harvest a wide variety of fruits and vegetables on the farms her father owned and leased north of Brigham City. Her family also grew a large garden beside their home, where she helped weed and harvest crops. To earn a little spending money, around age 10 she picked fruit for neighbors. In time, her father opened a greenhouse on the property. VerLee spent many late winters and early springs planting seedlings, row upon row in bedding flats for sale in her father’s business, “Mel’s Greenhouse”. She enjoyed photographing the most beautiful flowers around their yard over the years.

VerLee graduated from Box Elder High School in 1950. After graduation, she held several temporary jobs until she was hired as an assistant librarian at the Brigham City Carnegie Library. She enjoyed the job and talked about it the rest of her life. While working there she met her future husband, William Ross Stevens.

They were married June 6, 1952 in the Logan Temple. They settled into a small trailer until shortly after their first child, Mikel, was born. Later, they moved from the small apartment on the property into the main house where they raised sons Mikel, Lon, and Nile, and daughter Anna Mariea.

Her homemaking skills were well recognized, especially as a seamstress. Her sewing was impeccable. She sewed costumes for the family and others. Her embroidery was flawless and is still appreciated by family. She enjoyed crocheting doilies.

VerLee labored long and hard in the family garden, canning and storing its fruits and vegetables. Managing a frugal household taught her children important lessons of responsibility and honesty. While VerLee was skilled in many ways as a homemaker, she struggled in her role as a nurturer. Despite this, she made sure that they attended to school, church, jobs at scout camps, and any obligations they committed too. To their credit, all VerLee and Ross’s surviving children served missions, graduated with college degrees, and worked to pass on those values of achieving challenging goals to their grandchildren.

After the death of her youngest child in 1981, she enrolled at Stevens Henager School of Business. She graduated with honors, receiving an Associate’s Degree in Accounting in 1983. After working several temporary positions, she was employed as a Comptroller at Hill Field Air Force Base until her retirement in 1998.

As a member of the Church of Jesus Christ of Latter-day Saints, VerLee served as a visiting teacher, Cub Scout leader, and primary teacher. During 1997-99, she served as a full-time missionary in Madison Wisconsin Mission with her husband Ross.

Service will be streamed live and can be viewed by clicking here on Saturday, February 20, 2021 at 12:00 noon.

In lieu of flowers, please send donations to the Primary Children’s Hospital.