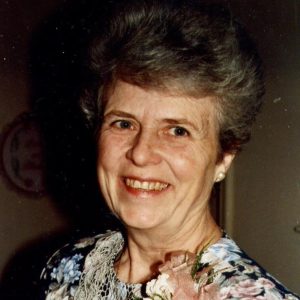 Ann Parrish Edwards was born in Salt Lake City on Nov. 9, 1933, and grew up in Centerville. From an early age she had a gentle, vibrant personality.

When Ann was six she contracted polio. After two months in hospital isolation, and with the help of a priesthood blessing, she survived, although she felt the effects throughout her life.

At the University of Utah, Ann met and married W. Farrell Edwards. They moved to California where Farrell obtained his PhD in physics and Ann bore two children while finishing her studies at Pasadena Nazarene College. The couple moved to Logan when Farrell was hired as a professor at Utah State University, and eight more children followed. Ann raised her brood of 10 with enormous love and patience. She relished being a wife and mother and lived her life for others. Her influence on her children was immense, and that same influence carried over to everyone she met.

Ann played the piano beautifully. She raised all of her children to love music, and they went on to sing and play many different instruments.

Ann held many church callings including Relief Society President, Sunday School and Primary Teacher, and Visiting Minister. For many years she carried out monthly activities for single adults over 60. She had a relationship with Jesus Christ and his gospel that was deep and sincere.

Never raised to hike and camp, Ann nevertheless enthusiastically joined her family climbing, kayaking, backpacking, snowmobiling, and canoeing. She was game for anything. On one occasion, when she was in her 50’s, she broke her arm playing basketball with her sons.

When a child would read or play the piano or perform anything for Ann, her reaction was always to clap her hands, smile, and say with gusto “Do it again!” Her grandchildren and great-grandchildren knew they could always find her sitting in her green chair, ready and waiting to listen enthusiastically to whatever they had to say.

For the last several years of her life, Ann was in near-constant pain, but she endured patiently and cheerfully to the end. It would be hard to find anyone who knew her to any degree who was not touched by her goodness.

Funeral Services are under the direction of Allen-Hall Mortuary, and condolences and memories can be shared at www.allenmortuaries.com

Funeral services will be live streamed at www.allenmortuaries.com