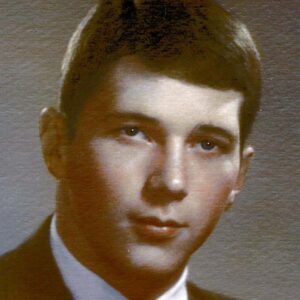 Alan attended Logan High School graduating in 1969 where he served in student government as Senior Class President. He also played on the football team, played the clarinet in the school band and played piano. While in high school he worked part time jobs at Spudnuts and Albertsons to pay for his first sports car, a 60’s Mustang, which he was so proud of.

After graduating from High School he attended Utah State University participating in the ROTC program and was a member of the Sigma Chi Fraternity. He later served a mission for the Church of Jesus Christ of Latter-day Saints and was called to the Gulf States Mission (the states of Louisiana, Arkansas and Mississippi). For a good part of his mission he served as the assistant to the President.

A week and a half after returning from his mission he met the love of his life, Mary Rae Kerr. They were both part of a church group that was attending the Utah State/BYU football game together. When they arrived at the game he decided to sit next to the beautiful long haired blonde. Since he hadn’t been home very long and dated in two years, he hardly said a word to her. She ended up moving to a different row to sit with people who would talk to her. He later got the courage to call and ask her out on a date so he could make a better impression. He did, and within a year they were married and sealed together in the Logan Temple on December 27, 1973.

Alan and Mary loved Logan and the Cache Valley area so much that they decided to decline job opportunities elsewhere to stay and raise their family. They were blessed with four children; Keri, Kimberli, Kelli and Kurt.

Throughout his lifetime he had a strong work ethic and went beyond the norm, always seeking ways to improve processes within the companies he worked for. Those included ERA Realty, Smiths, R&V Cultured Marble, Logan City Animal Control and the Cache County Jail. While working at Smith’s, his innovative ideas won him a trip for his family to Disneyland.

His family was the most important thing in his life. He enjoyed spending time together boating, water skiing, riding the “water weenie”, camping and hiking. He took pride in his camping gear and had the best set up to make Mary and his children comfortable. Some of his favorite destinations were Bear Lake, Lake Powell and Logan Canyon.

He never missed an activity of one of his children. He was at every dance performance and sporting event with his video camera in tow capturing every moment.

Despite losing his dear wife Mary at an early age of 43 to breast cancer, he did his best to continue raising his family on his own.

Alan loved dogs and enjoyed the many years he had with his beloved German Shepherd, Sierra, who provided continual comfort to Kelli, Kurt and himself after Mary passed away.

Alan had a heart of gold, always showing kindness and thinking of others. He was very mechanical and had a great knowledge of how to fix things and could be found tinkering with anything broken that needed to be fixed. He loved listening to good music, including the Tabernacle Choir at Temple Square and organ music. He could be found blasting that organ music so loud his whole house would rattle! He loved watching a good western and war movie. Over the last few years he discovered a new love in professional soccer, especially watching the women play. He loved making trips with his son Kurt to Riverton and South Jordan to visit some of his children and grandchildren. While there he enjoyed playing board, card, and video games with them. There was always great competition accompanied with lots of laughter. Oh and his sweet tooth, how he loved ice cream and peanut M&Ms!

He was a beloved husband, father, grandfather and friend and will be missed greatly to all that know and love him.

Alan is survived by his three daughters Keri Magleby (David), Kimberli Madsen (Jon), Kelli Lawrence (Paul) and son Kurt Wilson; his 12 grandchildren; his sister Janeth Stevens and brother Brent Wilson. He is preceded in death by his wife Mary, his parents, his brothers Deloy and Gordan Wilson and Brother-In-Law Dan Stevens.

Online condolences may be shared at www.allenmortuaries.net

WATCH: Waterfall freezes over in Romania